Skip to content
Ex-factor Friendship Relationships The Sisterhood Times, they are a-changing 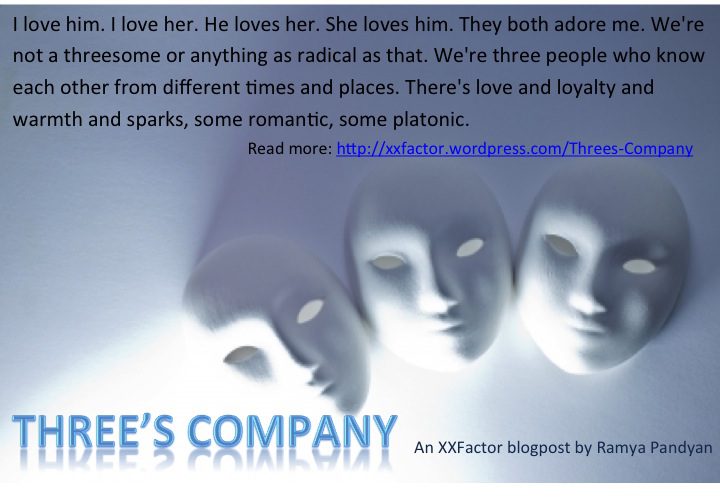 *Image (without text) via audfriday13 on FreeDigitalPhotos.net

She’s the newest entrant into this nexus, new to him as well as to me. But oddly, I think she actually balances us. Not balances each of us individually (that’s so ‘You complete me’) but balances the entire structure. We’re like a three-legged stool in that sense, teetering uncertainly with the first two but perfectly solid and steady as three.

It’s not because we have that much in common, I think. Well, there is stuff but it’s what started our conversations, not what’s keeping them going. He and I are more similar than it appears. And we drive each other nuts when things are imperfect as they usually are. Something about her presence has a way of running our respective electrifying natures to ground and earthing them. And there’s light instead of short circuiting.

Of course it’s more complex than our current natures, being that human nature is constantly shifting. He and I have a history, a long, long time ago, a complex one where attraction charred into hurt, froze into loyalty and solidified into friendship. We also have a history of anger, of heated words, of dramatic declarations and of intense closeness. She’s not part of that history. Maybe because of that, she clears the space of its high voltage intensity and makes it possible for him and me to be regular human beings again.

It hasn’t always been that way.  It only got this way after the two of them became a couple. I would never do anything to hurt her. He wouldn’t either. And because inflicting wounds on each other would mean bloodying the space that she is now a part of, we sheath our poisonous words and put away our tears. Then we all go out to dinner together and laugh about mundane things, like regular people do.