Red Lipstick Is My Superhero Cape 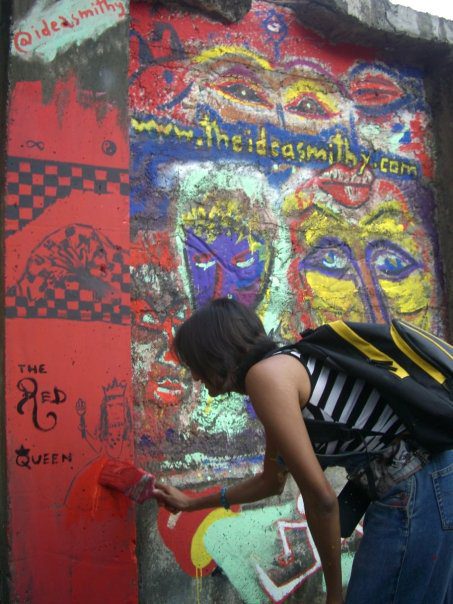 When I was small, lipstick was fascinating. It was a delicious tube that needed to be rotated and a magical colour would rise out of it. It would touch lips that made as if to bite it off (it looked so delicious!) but never did. And discreetly, its power unleashed, it would slide back into its case.

My own mother never wore lipstick and I didn’t have sisters so there was nowhere to experiment. Instead, I improvised and begged for a pack of Phantom cigarettes. I licked the ‘lit’ end of it gently. Then I carefully smeared it over my lips. When my mother saw it, she yelled at me and took me to the bathroom to wash it off. But my love of red lipstick was born that day.

I went through most of the teens hiding under the cover of Intelligent Girl, the one that was too smart for makeup, that was too busy thinking about life and poetry and philosophy and maths to care about dressing up. My standard issue clothing was white/black/grey teeshirts with blue jeans and sturdy boots. There was no room for the frivolity of colour in my life.

It was many, many years before I was allowed to own a lipstick (being that good Tamilian girls don’t wear lipstick, only moodevis do). And when that happened, I had been sufficiently Tamizhed enough to be conservative and prudent. Dark skins, I was advised did not look good with pink. Red was out of the question (refer aforementioned moodevi). Brown wasn’t a colour to wear on one’s lips because it made one look like one smoked. But maroon was suitable. After all, lipstick was only ever for special occasions. And maroon went well with everything.

The following year, I found the courage (or perhaps the stifling boredom) to rebel against conventional career and education choices. And I rebelled in every way I could think. Gloss entered my cupboard, then brown, then I teamed them both up, a la Toni Braxton in Unbreak My Heart. I discovered the delights of matte and the further intricacies of powder matte versus cream matte. I learnt the differences between lip crayon, lip stain, lipstick, liquid lip colour, gloss, base coat and lip pencil.

Around the same time, nail colour also opened up for me. (Moodevis did not have any say over nailpaint but school principals did.) And since experimental colour came back into vogue, I went black, blue, red, pink. Then I tried a different colour on each nail. And finally, all of them on every nail — stripes, polka dots, designs. The 90s were the birth of amateur DIY nail artists.

And finally I reached my third year of college and my last on campus. I had dropped out, signed up for a Fashion Design course, gotten admission, fought with my family, changed my mind and returned to science studies. I was determined to not just conquer that hated world but to vanquish it and lay it to rest, once and for all. And my choice of colour matched it. During the first month, I bought a brand new lipstick. It was a Revlon, my first. And it was innocuously titled ‘Bali Brown’. But a swish of the tube yielded a pair of red lips! RED!

When I walked into class, two of my classmates took out their sunglasses and put them on. Stupids, I sniffed. The next day I was back with it. And I wore it every day of the term, carefully touching it up between classes. I became Red Lipstick Girl.

I fought my way through the year, battling integration and n-dimensional spaces alongside classroom politics, a scheming Head of Department, MBA entrance exams, my first cigarette, my first relationship and my first breakup. And I slashed every single one off my list with blazing red lipstick.

In the fifteen years since then, I’ve had many adventures. Love, heartbreak, betrayal, friendship and trust have come intertwined with success, anticipation, disappointment and achievements. I’ve gone from being the rebel, grungy teenager, past the tomboyish intellectual, the strangled Barbie, the frozen career girl, the Corporate Bohemian, the prodigal good-Indian-girl and the early midlife crisis breakaway (complete with each one’s distinct look).

Since 2012, when my world crashed all around me with a failed engagement and no career to speak of, my lips have been bare. Earlier this year, I resumed dressing them again. It started with a chapstick, then a slightly flavoured lip balm, an occasional brown lip colour but mostly nude. Nude. ‘That is not a colour!’ I had thought to myself once. But that has been the shade that has kept my lips protected from dryness and from the cracks of failure. Saadgi has felt safe to me.

Two weeks ago, I told my doctor that I was feeling my age, feeling old and hating that I could barely climb the stairs. I used to be able to swim 20 laps a day, 4 times a week without batting an eyelid, I said.

he said. But I wouldn’t.

He smiled and said,

“You’ve been through something very difficult. Most people don’t get out of it.”

“I did! I’m perfectly fine now.” I declared.

“You are. But your confidence has been shaken since then. You need to regain it. Your health will come back then minute that happens. Just stop worrying and embrace the confidence that makes you.”

That was a cheering thought but not one that did the magic trick of taking me back to my high voltage, boundless energy, nothing-stops-me self.

But this afternoon, shopping with Reema, red lipstick beckoned to me again. Flush in the warmth of friendship and affection and good conversation and peace-making insights, I picked it up and asked the salesgirl to bill it. Later, I shut my room door, uncapped the crayon and held it to the light. Then, deep breath taken, I traced it cautiously across my lips. The colour brought me a memory. That memory gave me strength. I went out to look at myself in the bright light. And I smiled to myself in the bathroom window.

Red Lipstick Girl is back. Well, maybe not a girl anymore. But red nevertheless. Well, what do you know? It’s a Revlon again, a lip crayon this time (my first). And it’s called STANDOUT REMARQUABLE. How apt. I belong in red lipstick, not in saadgi. And it’s time to say goodbye to the nude gloss and embrace that.

Red Lipstick Day tomorrow. The Red Queen is back.

(Thank you, my darling Reema for bringing it back to me!)

8 thoughts on “Red Lipstick Is My Superhero Cape”