Skip to content
Battle of the sexes Comics On a lighter note.. Times, they are a-changing

Barbie With A Brain 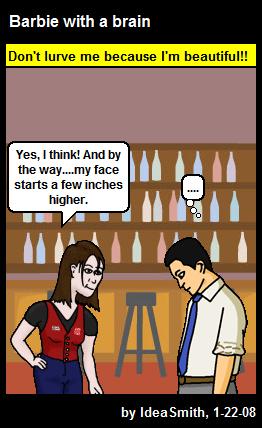 When I first chanced upon the Agony Aunt section in HT Cafe, I had to smile when I saw who was solving problems for the lovelorn. Kim Sharma!! Kim Sharma?? What sort of advice could she possibly give anyone?

Then today I read an interview with her.

You seem to have a mind of your own, so why do you have this image of a bimbette?
You tell me! I’m sufficiently well read, I can conduct an intelligent conversation whenever I get an opportunity to discuss things beyond Bollywood.

Maybe it’s because of the way I look, my voice, the pout I was born with..

Read the rest of the interview here.

My best friend, the last of the campus stunners has had her share of admiring hordes all through college and thereafter. A conversation that came to mind after I read the above interview,

So he asks me which college I went to and I tell him. And then he goes

I mean why should it be so surprising?I suppose I’ve got ‘DUMB’ written all over my face?!

And I chuckled and told her that,

It isn’t that. Beauty equals stupidity for most people.

To be quite sure, I am one of those people. I’ve been around enough of bimbettes and ‘Him-bo’s to loathe the presence of anyone who spends too much time before a mirror. People who get a lot of attention in childhood and their teens on account of their looks don’t seem to find the need to grow a brain or even *shudder shudder*…a personality. The rest of us find ways to compete in the attention stakes with grades, a sense of humour, whackiness, style et cetera…

But I wonder if that’s entirely correct now. Especially with women. I’ve always thought that women were far more practical and ruthless than men. And a pretty woman is perfectly capable of utilizing her looks to get her way (oh, don’t we loathe that sort!!!).

On the other hand, what of the few that don’t exactly like it? I can’t imagine that it is very flattering to be thought of as dumb, even if half the world’s population lusts for you. I wonder how many people would associate Madhuri Dixit with microbiology (after a brief flirtation with the medical sciences)? And who cares or even knows about Aishwarya Rai Bachchan‘s architecture degree (These get only cursory mentions on Wikipedia. I remember them as random trivia from the Ms.World pageant and filmi-gupshup days).

I suppose if they are really, really, really smart, they’ll let the world get away with underestimating them and not need validation. Barbie with a brain is probably too radical a concept for the world, after all.

5 thoughts on “Barbie With A Brain”