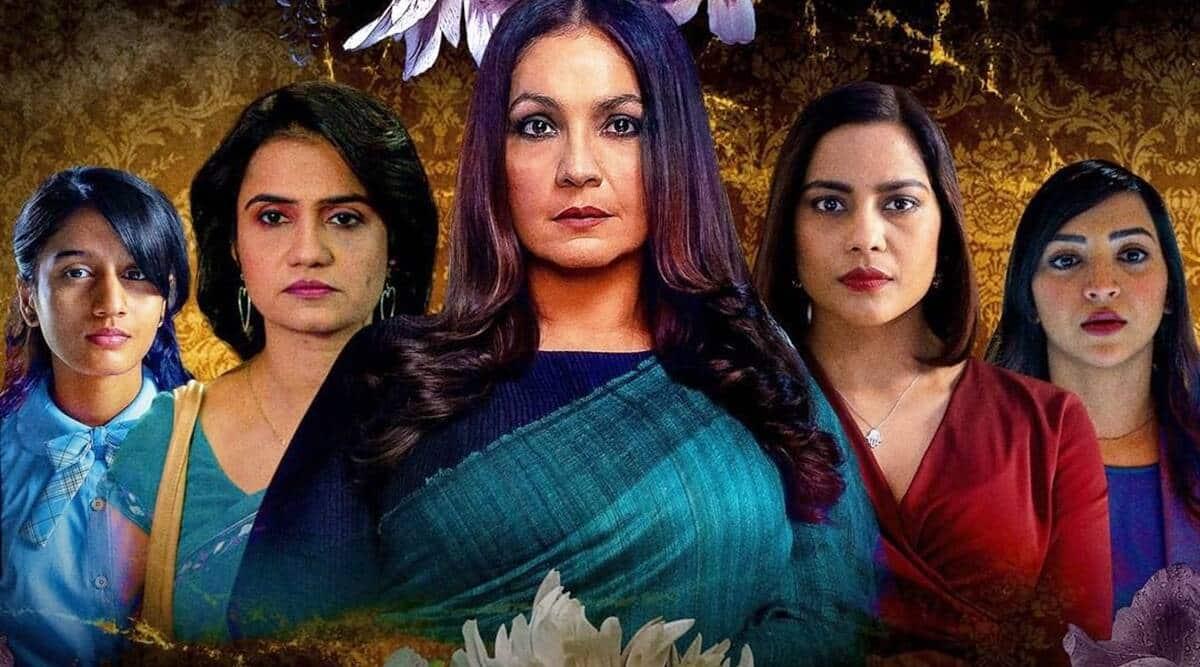 If you haven’t already seen Bombay Begums, consider this your spoiler alert. I approached the show with trepidation and a lot of thoughts. For one, it falls squarely into what I recognise as a Netflix India formula. A cast made of a yesteryear star, a sprinkling of Bollywood also-rans and a variety of character role new darlings. Queer people (and bi women are cutting edge because gay men are so passe) and a precise/antisepic quota of cultural differences for ‘diversity’. Gratuitious nudity & sex scenes that go on forever, around 1/3rd into the start. Lots of dark interiors with an occasional too-bright scene (usually an unpleasant situation) and soft-focus (blurry) shot to convey relief. Yes, I have been watching A LOT of Netflix in the past year.

Let’s start with the prime Begum, the one in all the promos, 90s bad girl Pooja Bhatt. My generation saw her enter public limelight as a mere teenager and thanks to the movies she was cast it, her trajectory as a spoilt/confused adolescent, a pampered diva (Poo but from the 90s) and some kind of awkward young woman not very comfortably cast in the traditional glamorous/sanskari Bollywood heroine mold. The last I heard of her is that she moved on from a rollicking and very public sex life with numerous starling boyfriends and married the Haryanvi farmer from the MTV promos. On one hand it’s startling to see her play the dignified CEO, Rani. On the other hand, the composure that is hard won, the quiet inner turmoil, the shrewd/soulless compromises, the jaded emotions feel real because we remember a younger Pooja Bhatt. I have no idea if this is how she is in real life but it would make sense to me if she was.

I remember steeling myself not to faint or double over in menstrual pain while making an important presentation. I was surrounded by men circling like vultures, waiting to pounce on the slightest stammer or hesitation. At one point, I said, “I’ll hand it over to <vulture colleague> for his thoughts” and bolted to the bathroom to puke my guts out. Then I washed my face, took a deep breath and walked back in, with a mug of coffee pretending I’d done it on purpose. All the times Rani masterfully tides over hot flashes to push through the boardroom made me feel seen, heard and most importantly, lauded.

Rani is not so much a grey character as a complex depiction of Strong Woman. She’s not damaged or broken but she isn’t quite whole. She is hyper-functional, never once losing her cool but we see the toll it takes on her health, her relationships and sense of self. She looks sore from carrying wounds that will never heal. She hasn’t made peace with her past as much as struck a kind of grim truce with it. And that’s real.

It made me really happy to see another depiction of the strong, successful corporate woman in the form of Fatima. Like her, I’ve struggled to look for mentors. I have also grappled with the guilt of not having it as bad as the women before me, anxiety that I’m not doing better (or for that matter, even average), been bewildered at how little the conventional gender expectations fit me, been a success in things that I’ve wondered if they were worth it. All the regrets as well as the helplessness that regret would be a part of any scenario, no matter what decision was taken, that’s Fatima. It wasn’t comforting to see it spelt out on screen but it was relief to know I haven’t been alone.

Shahana Goswami is a brilliant casting choice, especially fresh off her role in A Suitable Boy. After playing the flighty, society madam, she brings real dignity & restraint to her performance. Fatima (BB) & Meenakshi (ASB) both have adultery play a big part in their storylines but it is as if one is watching different people and it never occurs to you to compare because they’re played by the same person. I don’t know if every woman who has worked in a cutthroat corporate environment can relate to these two characters but I could. I could see myself in scenes of both these women.

I only want to mention the child character Shai because she’s presented as one of the ‘begums’ of this story. She wasn’t memorable except for her annoying voiceover narrating between scenes. What 12 year old talks like that? I can’t see the sense of depicting the inner lives of complex adult women in the writings of an unrealistically articulate brat. I think she’s less a character and more a prop to detail Rani’s life.

I quite enjoyed Lily and her cheery, never-say-die personality. But I am aware that her story looks exactly the way someone like I would think of it. I only have hearsay references for what life really looks like for a single mom commercial sex worker in Mumbai. I have a feeling she was in the story to ensure that it was taken seriously and not written off as a saga of ‘high-class auratein’. I’m not sure it does people like her justice but it probably was a valiant effort anyway.

Which brings me to the character that troubles me the most. Ayesha *deep breath*. I loathe this character so much, I got into a bad mood every time she appears on screen. She’s exploitative, inept and entitled. She sleeps with anyone who can help her but considers herself superior to Lily who does the same but also bears social judgement. Ayesha enjoys the privilege of middle-class respectability but doesn’t value it in the least. She smokes up in her PG accomodation that doesn’t allow it, sleeps with the ex-boyfriend she’s staying with even as his girlfriend sleeps in the next room, leads on a colleague so she can live with him but also cheats on him. She carries out the same horrible behaviour in her workplace, getting fired for ongoing ineptitude, being reinstated in a bigger role, sleepwalking through the work & pretending she’s destined for better things. The only people she values are the ones that draw clear boundaries with her – a lesbian friend who sleeps with her but tells her they’re not exclusive and a senior manager who takes sexual favours from her in return for a (completely undeserved) promotion.

I needed some time to digest the story because of this character, so visceral were my reactions to her. But now I’m realising it’s because she represents a very uncomfortable question. Does any woman, whoever she is, however she is, deserve rape? Can we consign such an unlikable character (and similarly real people) to that horrible fate? She falls prey to a system designed to exploit her. The moral policing that calls any independent action, rebellion. The objectification that reduces women to their bodies and their bodies to sex objects. The rape culture that prizes aggression in men and victim mindsets in women.

As far as female archetypes go, if Rani is the Queen Bee, Fatima the Rising Star, Lily the Amazonian Warrior and Shai the Fragile Princess, then Ayesha is the Professional Victim. She is not a good person or even a sympathetic one. She has no redeeming qualities. The best we (and other characters) feel for her is pity and even that is easily gone when she blunders into her next selfish move. She’s not a begum and never will be. But she’s who most people become when faced by life’s hard questions. Being a woman, makes these questions harder, louder and many more.

This wasn’t intended as a review so I won’t post any recommendations to watch or not. But if you have seen the show, post a comment. I’d really like to hear more thoughts on this story and its characters.