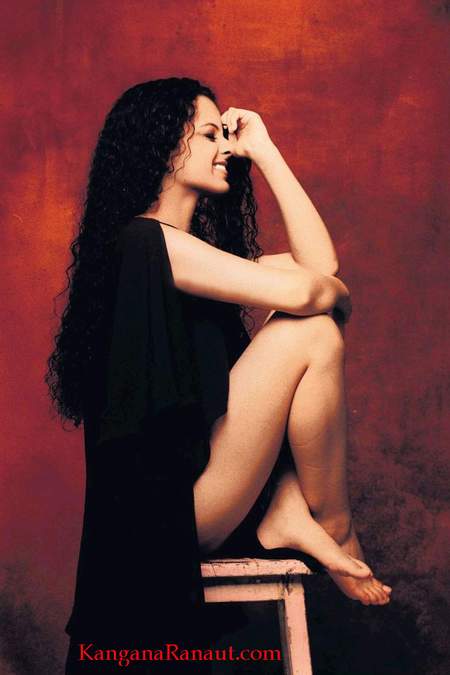 I’ve seen her in three movies – Woh Lamhe, Gangster and the gawdawful Life in a Metro. All three times her wobbly tongued-accent and nightmarish acting skills grated on me. But each time I see her on a hoarding, I have to admit, she catches the eye. What is it about her? She isn’t beautiful. But there is something beyond physical perfection. Is it the almost womanhood/still girlishness? The troubled confusion of adolescence not matured as yet? Lolita-esque is how I described her and then it made sense.

There was a brief clamour over the sexy Jiah Khan. I didn’t watch the movie and her pictures don’t give her Kangana’s appeal. I guess Kangana has the advantage of a few movies more, all of which have served to establish her as the quintessential child-woman in our minds. Ever notice how she only plays troubled characters? Gangster saw her alcoholic self stumbling on a kerb, crumbling in a heap and being rescued by Hashmi. Then Woh Lamhe gave us the wide-eyed terror of a schizophrenic, all being soothed away by Shiney. And finally Metro shows us slit writs and incessant smoking over the troublesome older man-lover. Always suicidal. Oh and the wild hair and slender, unblemished legs help.

The men drool. But why the sudden fascination for a flawed woman, a not-even-quite-woman yet? What’s this craze with Lolitas all of a sudden? I keep hearing about the child-woman everyone’s falling in love with, the nubile nymphet that no one can resist and the charms of ‘that girl’ who’s just a child really.

Child-woman. Hmm. I don’t loathe that description as much as Princess but it does seem a step away from BabyDoll (which is really a glorified fantasy of a paedophile when you think about it). This isn’t quite that young. Slightly older, well old enough for a full figure anyway but also young enough that the bare knees and occasional revealed cleavage seem unconscious. Brash and fiery, yes, but in a way that makes one want to protect her. From herself? Ah, how endearing.

At one level she is probably the female counterpart of the Bad Boy. However, unlike the Bad Boy to the woman who loves him, the flawed child-woman does not pose any danger to the man who is captivated by her. Except perhaps the loss of his heart. So the one kind of woman he trusts he can give his heart to now, is the one who won’t toy with it….well, not intentionally at least. But isn’t it kind of dangerous to give something fragile and precious to a little child? And one prone to getting into trouble that is…

While I have nothing at the moment against innocence and purity or even the sweet mischief that adolescent sexual fantasy is….it just makes me wonder whether this is another indication of the Modern Man seeking reprieve from his now-too-smart female counterpart…..and turning to a woman who will be one of those someday but not just yet. Today he can protect her, aspire to her admiration and adoration…and perhaps receive the ego validation his now-counterpart refuses to give him. Is that what the child-woman is about? I wonder.