I Have A Bloody Relationship With My Pad 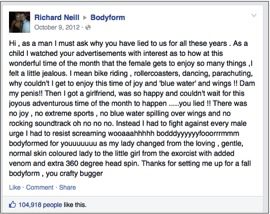 This is a Facebook post on the Bodyform wall (am the only one who thought ‘uterine wall’ just now?), written by a man asking why sanitary napkin makers have lied to him for years.

Bodyform responded with the following video by Caroline Williams, the CEO of Bodyform (played by an actress), apologising and explaining in the same tongue-in-cheek manner why they did what they did.

I’ve had a complex relationship with Whisper, the Indian version of the same brand. What else would you expect between a woman and her sanitary pad? Through the 80s, I was dimly aware of ads depicting rectangular white pads onto which blue liquid was poured and women spoke in hushed tag lines about ‘un dinnon ke liye‘. Then Whisper broke the silence (yes, yes, pun) with an ad that had a young woman demanding

“What’s this un dinnon business? I have my period, yaar.”

That ad was one of the first influences that built my feminist ideology. Score one for blatant commerce making social impact! It coincided with the start of my periods. I entered puberty listening to horror stories about wash-and-resuse-home-made pads, ’embarrassing’ leaks, panty-on-panty tips for heavy days, thigh rash, plastic shields and other monsters. But I entered the bloodied world of womanhood armed with a slim/non-bump-showing, leakproof, disposable pad. And it came with a big dose of rebellious daring to speak up/refusing to be embarrassed.

This is why I was so disappointed with the ‘Have a Happy Period’ campaign. Happy Period? HAPPYPERIOD???!!!!! Nausea, giddiness, headaches, backaches, cramps, endless hunger PLUS depression, the urge to laugh at insane moments, mad horniness combined with utter disgust – how on earth does HAPPY even figure in this? I dismissed it as having been conceptualised by a stupid man who had probably never even seen a bloodied sanitary napkin. After that, my relationship with the brand changed. I needed it, it needed me (as a consumer, that is) but we didn’t like each other anymore. Talk about a toxic marriage!

Then, with this turn of events, I felt better able to accept that c’est la vie (sometimes PMS makes me pretentious). A male friend from the media industry told me that sanitary napkins use blue liquid in their ads because they are not allowed to show red. Yes India, yes censorship, we have one of the biggest populations in the world but we don’t want to acknowledge the most basic fact that makes this possible. (Speaking of which, there must be a huge population of men that doesn’t even know there’s a connection between the period and population). You want honesty, no game-playing, men? You’ve got it. There will be no whispering behind closed doors anymore. No secrets unless you want.

I will end, both triumphant and saddened (these period moods, man) with this scene from Game of Thrones.

2 thoughts on “I Have A Bloody Relationship With My Pad”