Skip to content
Being Woman Friendship Relationships The Sisterhood

How Girlfriends Make My Life Better 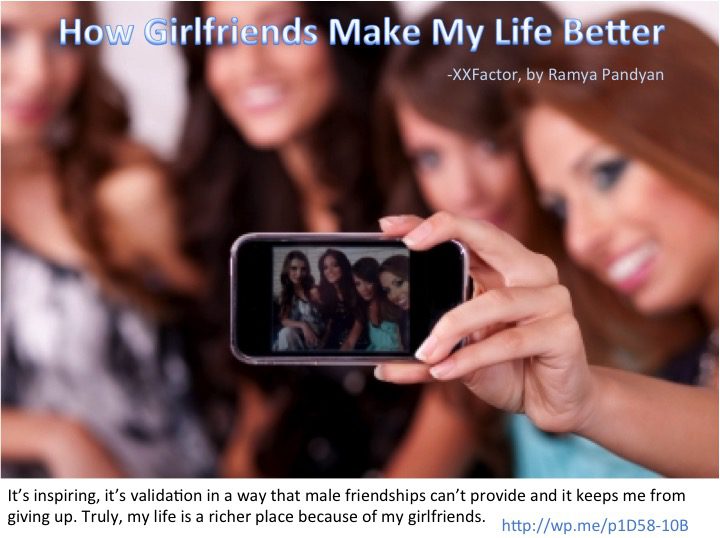 I’ve been thinking about girlfriends a lot recently. Men have comprised a major part of my life in these past ten years. They have been my primary references and the biggest influences on my identity and my relationship with the world. I’m not talking only about boyfriends. There still are more men in the professional world than women. And in the group of people for whom career and what they do shapes identity more than relationships, it’s almost exclusively been a boys’ club. Since my friendships are with people I respect, admire and like, most of them have been men. I haven’t been able to relate to most women. Our differences have come through in the form of competition, judgement and other hostlities that don’t leave room for friendships.

Yet, I have had girlfriends at various points of time. They’ve been really special, possibly because of how rare each of them was, by her gender in my life. Female friendships are different from my friendships with men. This is not devaluing the very many wonderful people in my life who are men. But given the life experience is so gendered in our world today, it becomes more than just (as I like to put it), body plumbing.

J was probably my first ever real girlfriend. We were buddies in school but at that time I wasn’t really conscious of the differences between boys and girls. It wasn’t till seventeen, when we ran into each other again, that I discovered what it was like to have a girlfriend. I was a precocious, over serious teenager, burdened with intellect expectations, heavy books and heavier conversations. J brought out the adolescent in me. She opened my life up to frivolity. Yes, that’s how I saw it even then, and yet it was an important part of life that was missing for me. She’s the one who taught me about make-up and deodorants and clothes (“It’s not lean-ge-ree, Ramya, it’s lingerie!”). My teenage years would not have been truly magical in that way only adolescence is, if there hadn’t been room for crushes, for dressing up, for agonizing over looks and words and strangers.

J left my life around the start of our twenties. I know now that we were always very different people and it was just our common age that brought us and kept us together. Well, also perhaps the fact that we shared some common problems that are huge for a teenager — bad teeth & braces, unrequited crushes and a delayed sense of coolness. I was angry with her for the way things ended, for a long time. But I know it was inevitable. We were both too young to be gentler about it.

There’s P who also goes by the title of Best Friend. This is a difficult relationship to explain. We were friends in junior college (for the exact period of time that J and I spent apart between school and collage). And then we weren’t friends for a span (when J and I were close). And automatically, almost the very minute J and I parted ways, P returned to my life. We were both older, had grown into our individualities and were young women, not awkward teenagers.

P and I don’t really have much in common. Not shared interests, not personalities, not even common friends. Yet, she is the only one who was there, really there when I was in a bad relationship that I couldn’t think straight enough to get out of. Years later, I was the one who met her at the airport to tell her that her father had died. Once you’ve shared trauma or death with a person, you are bound to them in a way that makes it impossible to walk away completely. This about more than gratitude. In the unlikeliest of ways, P really gets what it feels to be me. And yet, she makes different choices, lives a different life. It’s really quite mind-boggling.

This year has been one of reckoning for a number of reasons. For one, it has been two years since the BIG relationship ended. It made me rethink my priorities, my values and indeed, myself. Marriage and a romantic relationship with a man became less relevant in the recipe for a happy life. And it allowed me to think of my relationships with other people and other aspects of the world (including work, health, money, home and my hobbies).

How I relate to men has shifted. In romantic situations, I’m both more cautious as well as less afraid of risk. That is to say, I’m willing to try a lot more with less fear because I am not as scared that mistakes will break me. And at the same time, I’m also less willing to commit because, really, I don’t even know if that’s what I want anymore. But also in other non-romantic relationships, the way I see and relate to men has changed. I do not idealise men anymore. This means I don’t rever virtues in men as much (because now I know believing passionately in something and being able to act on it when the situation demands, are two different things). Oddly, it also means I expect less and am a little kinder on their failings.

So where do girlfriends come into this? Because men don’t form the rocks, the pillars of my life anymore — how could they? The best of them are struggling to cope with being an overcoddled sex and also hold on to their sense of what is fair. The idols have melted. It has left a lot of space in my world to deal with life’s stuff on my own. I’ve been learning to make less of big deal of things, fewer snap decisions based on momentary emotion. So much space has opened up. And in this space, women have popped up.

There is of course, my wonderful Reema. Time, maturity and life were just right for her to happen as she did. We are both intelligent, independent women who don’t anymore need to prove ourselves with heavy conversation. We are also both pleasure-loving, light-hearted human beings who don’t have to live flashy lives of friovolity either. Reema and I talk about books, lipstick, the future of digital media, stupid people, the cities we’ve known, philosophy, family and life. We are different people, with different lives. And we have some similarities. I love the fact that this friendship allows us both to revel in the similarities (it’s always nice to have company) as well as explore our differences in a safe manner free of judgement.

A number of other women have appeared in my life this year too. They’ve come to this place in their lives through differnet journeys from mine. But like me, they are open to the experience of being with another human being who is respectful and fun, not just similar to them in some way.

It’s only now that I have it that I realise what my life has been missing all these years in not having enough female friendships. With men, there are agendas looming over every interaction. There is romantic/sexual interest in some cases. If that isn’t possible, then boundaries have to be constantly drawn and adhered to so that the rest of our lives are not destroyed. These boundaries don’t have to exist in relationships with women. I say don’t have to, because there are still a lot of women like J who value rules over experiences. But there are other women like me who are willing to risk saying or doing things that aren’t socially usual, in the hope of a bigger life.

What’s especially intriguing is how different these women are from me. Two of them are happily married, one of them is a mother. Several of them are making interesting decisions with their careers — one of them juggles an MNC job with sabbaticals to go travelling, two others have diversified from their traditional fields to include more creative elements (like me), two have businesses of their own and are dealing with the ramifications of this level of independence on their family lives. They are making courageous decisions in their personal lives — living-in, deciding to not have kids, going in for fertility treatment to have kids after a certain age, breaking free from family and living on their own, choosing to be part of a joint family, divorce and remarriage.

It occurred to me recently that female friendships are not celebrated. In fact, they are presumed to not exist. After all, it is in patriarchy’s best interest to keep women subservient, stupid and apart, isn’t it? What logic can there possibly be for statements like ‘Two women can never be friends’? When two women become friends, something big opens up for both of them — they are able to articulate things about their lives and worlds that feel incomplete, they are able to gain strength from each other and support each other in challenging these norms and if they are lucky, they go on to live fuller, richer, freer lives. All because of a meaningful friendship.

I feel like I went through the 20s feeling and believing that I was fighting a solitary battle to be me, to be more than the relationships and gender stereotypes imposed on me. But the 30s are bringing me into contact with several other women who are doing these too. It’s inspiring, it’s validation in a way that male friendships can’t provide and it keeps me from giving up. Truly, my life is a richer place because of my girlfriends.