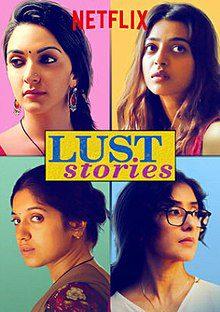 This weekend saw the Netflix Originals premier of ‘Lust Stories‘ – a format repeat from the 2013 anthology ‘Bombay Talkies’, with the same four directors, each contributing one story. Let me pause a minute to CRINGE at that name so you can understand why I was expecting something along on the lines of the sleazy Hate Story franchise. Happily, it wasn’t all that bad. None of the stories are titled so I’ll refer to each one by its respective director.

Anurag Kashyap‘s tale was a moody character sketch of a woman just like most of his films. I disliked her then I related to her and finally I accepted her – echoing my experience of every Kashyap film I’ve seen. This story assumed female lust and agency as a fact. If we embrace those, then this is the most nuanced depiction of a woman and her desires since the arthouse period of

Rekha, Smita Patil, Shabana Azmi films. The introspection-by-4th-wall-breaking was really annoying but it added a certain relatable flavour to the central character, making her a human being with her irritating quirks, rather than an ephemeral nymph/predatory cougar. She is both and she’s more. I had a ‘Shabd‘ flashback but given that Kashyap took forward the sexual politics of the situation and gave it a woman’s voice, I think this movie stands as the best of the Lust Stories.

Zoya Akhtar‘s story was a lot like her tale in Bombay Talkies – a simplistic, privileged view of middle class India that still charmed because it stopped short of preaching. Just short. This story was less about female lust and rather labored the point of women being sex objects for men. It didn’t say anything we haven’t heard before and served as a neat filler sandwiched between two intense (and good) stories. I do want to clap for Bhumi Pednekar’s performance in this film. I counted exactly one dialogue by her in the whole story(“Saale nange”). All the rest is lingering gazes, a trembling hand, a stuck breath and it is everything that is good in this film.

Dibakar Banerjee‘s film was my favorite in the lot because of the character nuance. The story explored male vulnerability and fragility with sensitivity. But female lust was the subtext of this movie rather than its central point. This is a story about male emotions rising around and (partly) manipulated by the female object. The Wikipedia page of the film only describes Lust Stories as being about lust. But given that the promos only feature the female characters, one is led to assume that they are about female lust – wherein this one doesn’t fulfill the brief. Manisha Koirala as this seniormost actor (even if a faded one) in this entire anthology rocked even her straitjacketed part, moving from a Waheedaesque Aaj phir jeene ki tamanna nymph to a throwback to her Akele Hum Akele Tum sorrowful self. The one lovemaking scene in this film pans on her smiling indulgently and sorrowfully as her lover grinds (with tears) above her. It captured the entire essence in a story that should have been about her, rather than the men that she happens to.

One thought on “Lust Stories: Wham, Bam And A Thankless Ma’am”