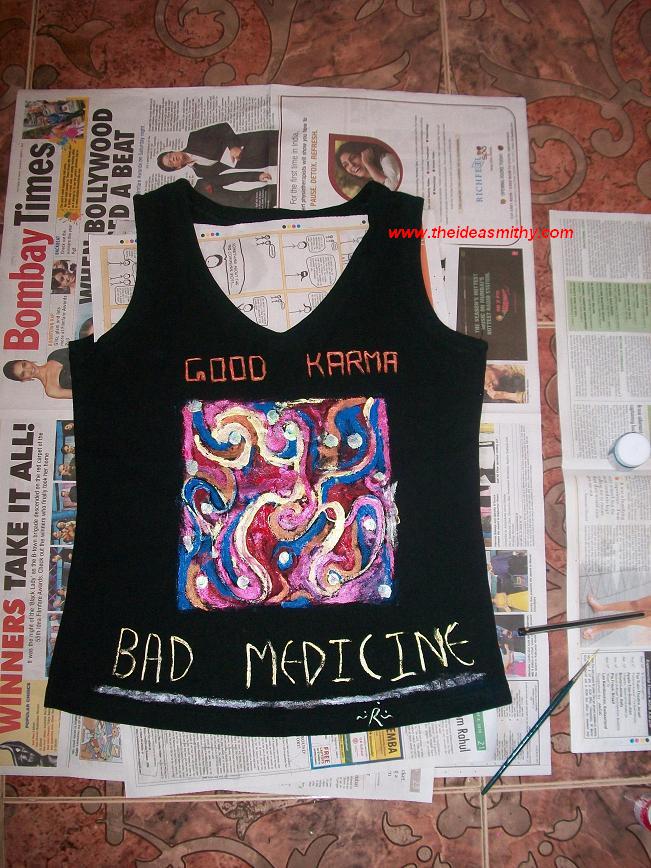 A few days earlier I had a thought. The words

just formed themselves in my head. I can’t quite explain the thought. It was one of those ideas that just showed itself and vanished before I fully explore it further. It still sounded interesting. I put it up as my Twitter/ Facebook status to see if I could glean anything from it from seeing it in print. Still no luck. It was one of those things that you can just about see from the corner of your eye but never quite catch it straight-on. That’s when it occurred to me that the best way to communicate this thought may be visual and not verbal. And I realized that it had been awhile since I wielded a paintbrush.

The minute I had that thought, the image I needed flashed before my eyes.That was just it. The idea was a picture, not a sentence or story. After that it was just a matter of executing it. Luckily I had a plain black singlet handy and kept waiting for just such a time. A budding artist learns to store away material that could come in useful.

This is a tank top, that I picked up the first time I saw it because it is the thin, stretchy tee-shirt cotton material. There are no big logos or pictures on it and the cut is basic but curved along the sides rather than the straight up-and-down of unisex tees. I hate those since they hang and tug alternately.

The first thing I had to do was figure out a way to get rid of that little logo in the corner (little as it was, it was still in a white rubberprint and stood out) since that would certainly not do with the idea I had in mind. I was out of black paint so I tried dark blue and dark green but the rubber print of the logo showed right through both of these. Finally I coated it with Fevicryl Pearl Black no. 306.

I wanted the picture to be exactly in the middle of the visible area of the tee-shirt. If you are painting a tee-shirt for the first time, I recommend putting it on and marking off the area while still wearing it. Otherwise, one is used to the stark, solid borders of paper and too often the artwork goes over the visible area or looks too small or big. Clothes fall on each person’s body differently and ideally you should always see the garment on the wearer before painting on it. This area usually comes to about 8in x 8in or 20cm x 20cm on my clothes (and I rather smugly report that it turned out a perfect square without using a ruler or even pencil sketching!)

I started with a swirly line using a thin brush and Fevicryl Pearl Spring Green no.311 and then Fevicryl Cerulean Blue no.32. But I realized that a psychedelic design with multiple colours would need to have broad strokes for each colour to be visible and not get lost in too-intricate strokes so I switched brushes. After that it was a random selection of colours applied in strokes, splashes, squiggles and splotches. I painted over in a number of places and in other places I also used the same brush in multiple colours without cleaning the brush. This last gives the effect that you can see to the right of the second dot on the right. The yellow and pink run parallel for a bit before the yellow strikes out on its own. The colours must not be too liquidey if you want this effect since otherwise they’ll merge into each other.

This is one design where red (my favorite colour) was not the most striking note. On the contrary, the red quite got lost in the gloss of the other pearly tints so I used it as background in a number of places. When I had covered the entire square, I dabbed on circles with the Fevicryl Pearl Spring Green no.311 and you can see the colours beneath through the thin veneer of the green, in places.

I originally intended to paint the words over this design in black or white. But I realized the paint area was too small to fit in words and besides, it was too striking to waste as background. Besides, there was enough room above and below for lettering.

I tried for a digital-looking font and a religious-looking orange (Fevicryl Metallic Red no. 356) for the words ‘Good Karma’. In contrast the words ‘Bad Medicine’ at the bottom are in a more graffiti-like font in a Fevicryl Pearl Lemon Yellow no. 302.

Finally I noticed that the painted-over patch over the logo in the bottom right corner had dried and was standing out against the black. So I painted on a stretch in the same colour across the tee-shirt, a sort of rough underline the way one would highlight a graffittied sentence.

I’m not sure whether the finer points like font and colour would be noticed but I’m guessing they would register at a sublimnal level. The message just is one of those things. I wore this with worn-out blue jeans, a silver chain double-looped around my neck with a New Age faerie pendant. It got some appreciation. 🙂