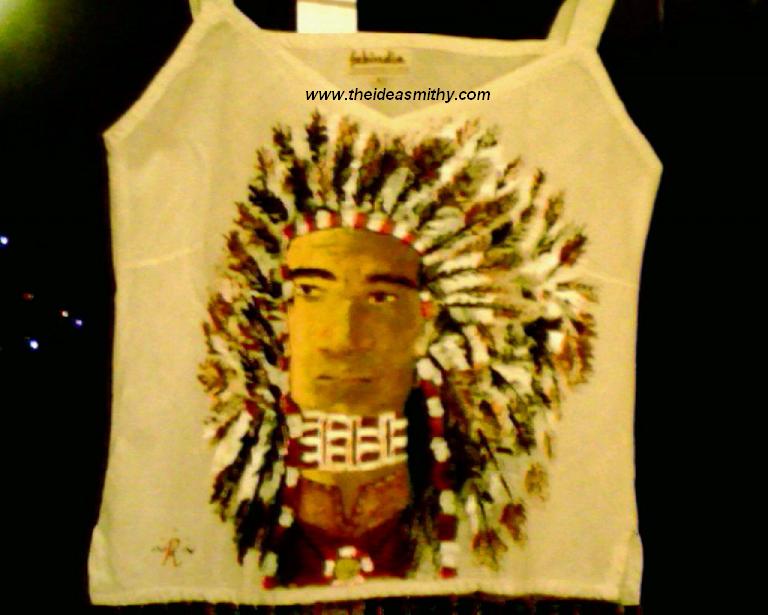 This piece began at the height of my ambition as a fabric-painter. It was one of the few ones where I actively went looking for the garment and bought it only because I had a painting project idea in mind.

It was a creamy-white cotton vest from FabIndia with flat straps and a fringe of hanging plastic beads at the bottom. They had it in a number of other colours but which artist can resist the lure of a plain white?

I saw it and knew it was perfect for a painting. I had initially imagined an Indian motif or scenery, in accordance with my craze at that time. But the garment design was more Western and I’d been doing so many village belles, traditional motifs and dancers that I was looking for a different challenge. The beads at the bottom made me think of Native Americans.

Their images are also colourful, not in same vibrant hues of India but in more muted earthy tones. The fact that the vest was cream and not pure-white made it even better since it would offset the rust and brown tones that I envisioned, perfectly.

The tricky bit was finding the right image to paint. My actual paint area was quite small since the vest is very close-fitting, almost like a tank top. I had to stay within the limits of my (considerably narrow and small) front torso view. You should always see the garment on its wearer before planning a design. It gives you a sense of your boundaries (you can’t exactly print all the way to the side-seams since the areas under the arms will almost never be visible.)

I decided to elaborate my experimentation and do a portrait. I’m more of a big picture person, I like fitting in plenty of details, little sub-plots into the story of a painting and I find portraits generally too boring and one-focussed. So this portrait would have to be a big enough story in its right to hold interest.

I picked a man (once again, rather ambitiously, since I don’t think my sketches of men turn out as well as the ones of women) for my subject so I’d be able to bring in the gorgeous head-gear that the braves wear. I decided he’d be on the older side so the interest value in his face would come from the weathered lines of age (symbolising wisdom and experience) rather than aesthetics. Also, he would have to be older to don an elaborately plumed head-dress (each feather has to be earned by an act of bravery).

I didn’t do any sketches or outlines but started right away with the forehead, worked down to the face and then started on the headdress. The shading on the face turned out much better than I had hoped. It was just a matter of dabbing on varying hues of skin tone before they dried completely, which gave them a chance to mingle and look more realistic. The right corner of the face was touched up with the yellowish hue and I deliberately let the line show since light falling on that side would end in a sharp line.

I didn’t spend too much time on the rest of his body and garments, which is why the neck looks a little off and the collar is of scant interest.

The headdress was the part that I was really waiting for. I stroked out hairfine lines emanating out in all directions from the headdress border. Each line served as the spine of a feather. Using a fine-tipped brush to give the feathery touch, I painted using Fevicryl no.

Quite to my surprise, the most interesting part of this painting turned out to be, not the brave’s headdress but his face itself. I didn’t plan it that way and I certainly didn’t think it would turn out that well (though I’m really thrilled it did)! Art is so much fun when it surprises you this way. I still look at this piece and think,

I did that?! Wow, someone else must have possessed my body at that time and guided my hand.