Skip to content
Being Woman Media Messages Times, they are a-changing

Down With Women’s Day! 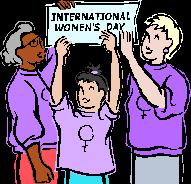 It has been awhile since my last post. I have let myself get caught up in things I must do and not paid enough heed to things I love to do. So here’s me saying, I’m going to make sure to post at least once a week here at XX Factor! It feels wonderfully appropriate to come back with my spewing self at this time. The barrage of communication, that popular media is bombarding at us about March 8th, can’t have escaped anyone’s notice.

Women’s Day is the new Valentine’s Day. I don’t think this day was ever meant to be more than a manufactured marketing opportunity, much like the 14th of February. By 2012, the blatant commercialization of it is hitting me hard enough to swear off the event.

For starters, the premise of a ‘day that celebrates women’ seems ridiculously parodist. The suggestion is that making a big brouhaha about women on one day, cancels out mistreating them the remaining 364. “Obviously not!” I hear the defenders of Women’s Day retort, “It symbolizes the movement and honours the struggles of women”. Fair enough. But the fact that it stops there is what bothers me.

There is a certain kind of woman who celebrates and is celebrated by ‘Women’s Day’. This is the kind that is well-educated, has access to modern media & other creature comforts and receives gifts of jewelery, clothes or a fancy dinner date. But, well, there are other kinds of women, aren’t there? Let’s not get into rural India, even in the cities, women comprise nearly half the population. The maids, the women constables, the bank clerks, the fisherwomen, the conservative housewives, the daughters & wives of sweepers, taxi drivers and watchmen – they’re all women too. Women’s Day (not belying its all-encompassing name) doesn’t include them.

I think Women’s Day in 2012 is an ugly combination of Valentine’s Day and the Gay Pride movement. Let me explain. The former was created to sell more chocolates, greeting cards & jewelery. The latter has been hijacked by a small but very visible group whose joint agenda appears to be self-promotion rather than actual upliftment of those denied basic human rights. (read this thought-provoking diatribe against the ‘Queer Movement‘).

I had a conversation with a cab-driver the other day. We were stuck at a crowded Bandra signal, rush hour made worse by mismanagement by the traffic police. He pointed to one uniform-clad figure and opened his mouth. I settled back for a minute of co-ranting about the inefficiency of the department & the neglect by BMC. Instead, he said,

“Why are they making that woman direct the traffic? Give her some comfortable job in an air-conditioned office. What would she know about a hard job like this, standing in the middle of dust and fumes & noise?”

I had barely registered the fact that the traffic constable was a woman. I was astonished by the fact that the taxi driver truly believed that he was being supportive of women. Perhaps sensing my discomfiture, he assured me that he was putting his daughter through school and that women were usually more hard-working and honest than men. Further astonishment.

You know, I don’t like being thought of as more hard-working on account of my gender. For one, the pressure that lays on you is unimaginable. And further, it turns a complete blind eye to an obvious fact – women can be just as lazy, incompetent and talentless as men. No more, no less. Setting us up on a pedestal is just as bad as grinding us down under boots – it’s still differential treatment. Why do some people equate deification to empowerment?

Which brings me to yet another thought. I think I’m going to cry if I hear or read another thing about Shakti and a woman being able to take the forms of Lakshmi or Durga as she pleases. Personally, I believe that these archetypes represent values, not gender-based prototypes. But that’s a discussion on religion that I don’t want to get into. Suffice to say, if the only powerful women one can think of are religious icons, how powerful a message is this to the common woman? Really, there’s nothing else that this country can think of, to say to empower women?

I know that I am exactly the target audience of the Women’s Day brouhaha. And I reject it for reasons other than altruism or boredom. I feel it actually demeans me. I don’t want to be treated differently (badly for 364 days, splendidly for 1). Celebration suggests a different form of discrimination. I need no special treatment. Behaving differently on one day of the year is hypocrisy, not empowerment.

It also hasn’t escaped my notice that this year Women’s Day falls on the same day as Holi, another occasion that has been debauched into a cover for unbridled sexual harassment. Now, isn’t that ironic?

4 thoughts on “Down With Women’s Day!”