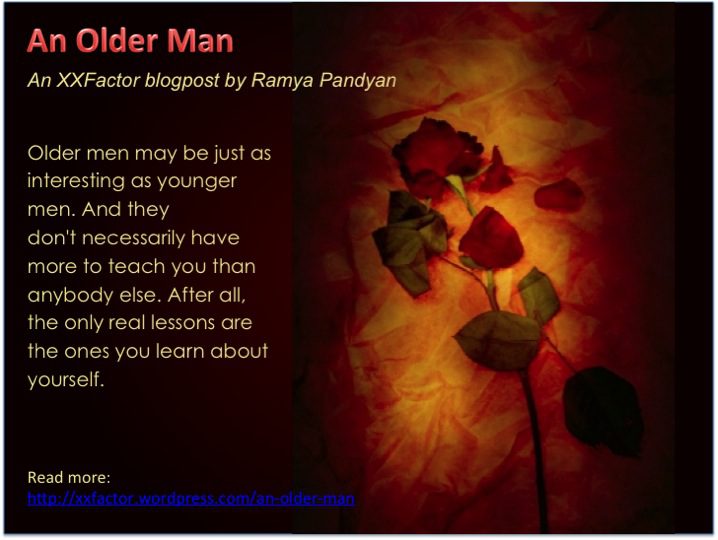 I went out with an older man, recently.

The last time there was an older man was way back when. He didn’t add much to my life, except some invaluable professional wisdom (I was a new manager and in agony over it. He told me it wasn’t a popularity contest and that I needed my team to respect me, not like me. It was solid advice.). Then he dumped me over Facebook, proving the male stereotype that men never really grow up. But that was a long time ago, when I was still in my mid-twenties. Post thirty, the men I’ve gone out with, have almost all been a few years younger than me. It’s been an interesting experience of all sorts.

Now, an older man again, about 7-8 years ahead. He’s tasted 40. Professional disillusionment, social impositions – these aren’t new to him. Breaking free of forced labels, struggling with diverse identities – he has experienced all these grand adventures of life that I have, as well. He’s rather nice looking, especially for his age, well-groomed and fit. It’s nice, no, who am I kidding, it’s wonderful to know that there are men like that too. Age, steadily creeping up on me, doesn’t seem as scary if it looks the way he does a few years from now.

*Image (without text) via Victor Habbick on FreeDigitalPhotos.net.

Then again, there’s the uncertainty, the drifting which is still there and THAT is an incredibly scary thought. You always think that you’ll have figured it out by such-and-such age (and that age keeps shifting as you get to it). You vaguely imagine that people older than you are ahead of you on the life learning and making-sense road. It is always disconcerting, unpleasant even, to remember that’s not true.

I’m not going to say that it was nice to be able to have a real conversation for a change because that would be doing a grave disservice to the younger men I’ve gone out with in the past. Every person I’ve dated has been intelligent and articulate, age regardless and their lives, whatever point they’re at, have been of immense interest to me. For the same reasons I mentioned above, a 28-year-old may have figured out things that I still haven’t. And the pressures of closing in on 25 are different now than they were for me. It’s not that.

I wish I could pretend that it was comforting to talk to someone who had experienced what I have. But that was minor. Does commiseration matter less to me now than it did, in 2008? Yes, perhaps. He was kind, helpful even, but respectfully. I guess he has lived long enough to be generous without needing a payback in the form of control. This, I liked very, very much. I didn’t take his proffered offer (something professional) but I appreciated it greatly, anyway.

What surprised me was how thankful he was, for my time and attention. Younger men are not that. They’re in awe, sometimes surprise, even fear but rarely thankful. Appreciation without obsequiousness is learnt over time, I guess. At that moment, I felt disheartened. It made me think that men and their relationship with me would always be that way – awestruck at that beginning, gradually cooling off to indifference and then, bad behaviour. But a little later, I realised it was different. It was ‘I’m very happy you agreed to come out with me and now we can both have a nice day.’ rather than ‘OhmigodohmigodOMG you said yes can we do this now can we do that wait I’m awesome tell me I’m wonderful no you can’t say that no I don’t like what you’re saying no no no you’re horrible go away I don’t like you anymore’. It was graciousness and it was graceful. I liked it.

But you know what I liked best about going out with him? That fact that I did not fall in love with him or feel the need to. I didn’t do the female equivalent of that desperate emotion diarrhoea either (yes, I realise I’ve done that too in my past). I liked him, he liked me. We laughed, we pontificated, we both talked and we both listened. And I didn’t feel the need to put a deadline on caring. I didn’t assign any metrics in my head to the various components of each date. And I didn’t run complex equations with these to figure out ‘Will he love me or not?’ I didn’t do any of those things and it was a good date. I actually spent the whole day with him on the 14th of February and it was fun untainted by the pressure to make it more than it was. That’s not just a memorable Valentine’s Day, it’s a personal milestone for me.

Where does it go from here? Oh, nowhere, I think. He has moved to another country, following a different destiny. And I’m going my way. Hail good person and well met. I’m pretty sure this is all part of why life only gets better post 30. Older men may be just as interesting as younger men. And they don’t necessarily have more to teach you than anybody else. After all, the only real lessons are the ones you learn about yourself.