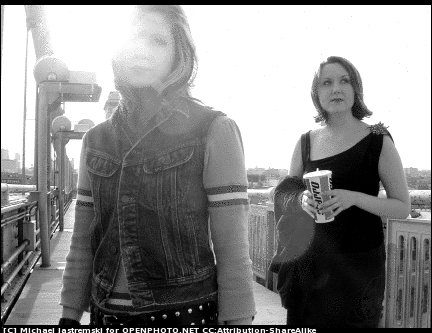 To ‘the one special woman’,

You are the stuff of memories that never fade, rust or get forgotten. You are the overriding factor above everything hormonal, practical, emotional, logical and fair. Indeed, you must be special.

I’ve been thinking about you a lot. Do you know who I am? I am the one who he leaves to chase you. Or the one who battles with the insurmountable statue of you up on the pedestal. I am the real-world girlfriend. I spend the boring, traffic-laden, polluted days with him while he reminisces about the special candlit dinner-violin serenaded moments with you.

Actually we’ve met a few times. Once you were a good friend who toyed with the idea of him while I stood around waiting and then handed him back to me, slightly soiled, a few months later. The thing is you gave back to me his bruised ego to heal but not the fragments of his heart. That you kept for yourself and I’ll never be able to touch them.

Some other times you’re a stranger, nice and pleasant. You are never off-balance, never irrational, you never scream like a banshee. No, I do that….after all, security brings a level of peace and calm and I wouldn’t know what that looked like.

A lot of other times we haven’t actually met or even spoken. I’ve looked at photographs of you, heard about you from friends (and from him) and wondered a great deal about what you must have that I don’t. You aren’t prettier. Or smarter. Or nicer. Or more loving. But in his memories, you are incomparable.

I’ve thrown in the towel a while ago. I can’t compete with a memory. Or perceived perfection. I am real. Flawed, inconsistent, imperfect. I have acne, PMS, extra inches around my tummy, doubtful taste. I’m the real thing. Well…that can never compare with the poetry of a fantasy, can it?

Your position isn’t exactly a complete one either. For you do know what will happen the minute you succumb? You’ll turn into me. I guess you know. Which is why you let this state exist as it is. I guess it is better to be adored from a distance than ignored right to your face.

Do I sound bitter? Yes, I am. Very. I wanted someone to want to settle down with me, not settle for me. No one wants to feel like a consolation prize.

‘My Best Friend’s wedding‘ was about me. But I am not always like that. The platitude talks about wanting happiness for someone you love, even if it is not with you. I aspire to do that, even if I don’t always succeed. Believe me, if you think its difficult being friends with me, you have no clue what its like for me to battle envy and resentment and like you for who you are. Well, you are likeable. Which makes it even more difficult.

I won’t ever tell you this to your face. Why, I wouldn’t even admit to him that he’s important enough to me to colour my thoughts of another person. But I feel it. I guess all I have left is the thought that….

Even if you are a better woman than I am, I love him more than you ever will. Now if only, he’d understand that. But that probably doesn’t matter.

An earlier version of this post is here. A version is also posted at Yahoo! Real Beauty.