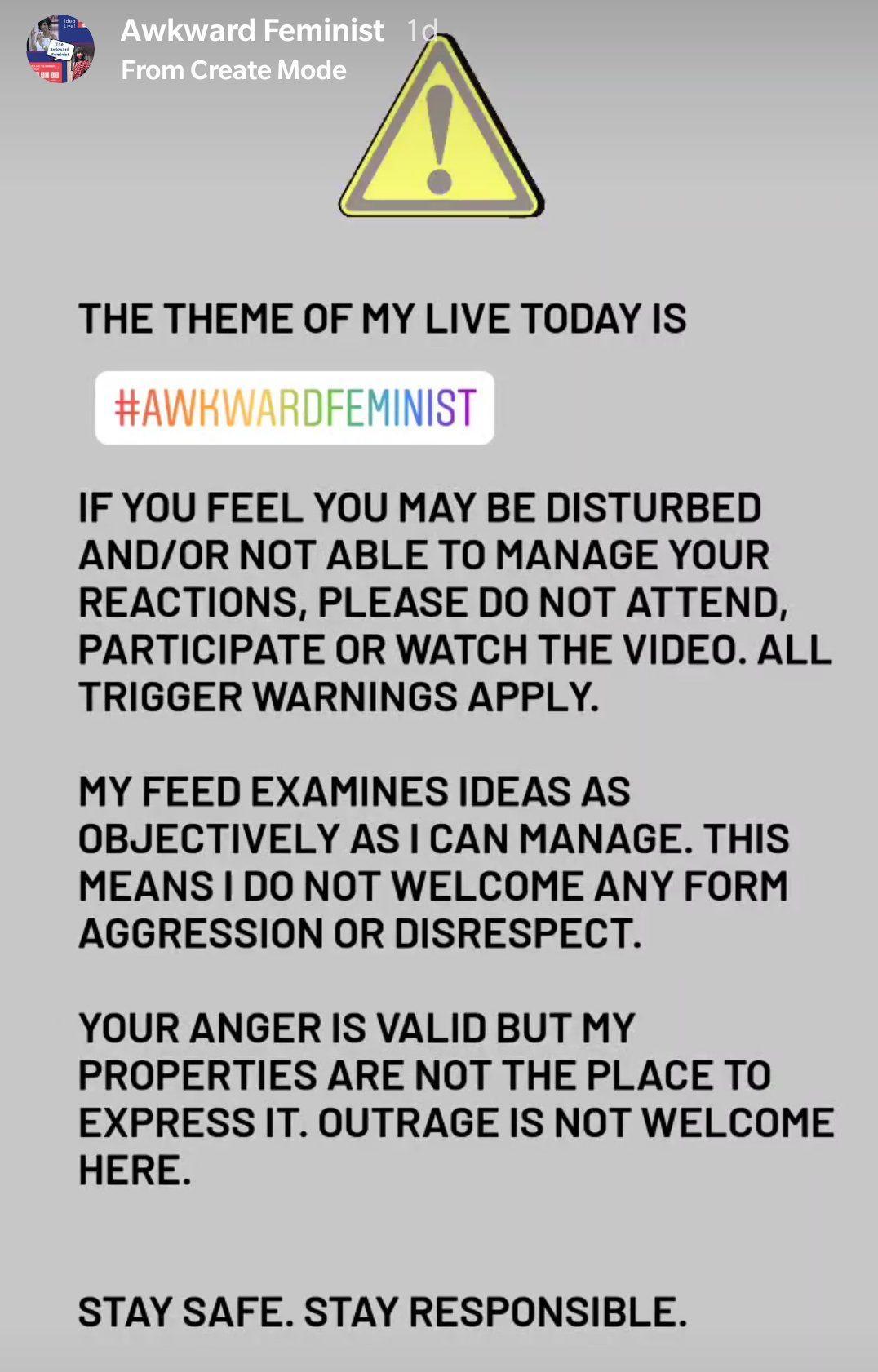 For the past seven months, I’ve been hosting weekly Instagram Lives – unscripted conversations with various people on themes of mutual interest. It began as a pandemic need, to feel human connection even if only via the internet. I’ve felt so shriveled and starved by the lack of conversations in the past year. I thought it would also be a nice way to rejuvenate my XXFactor self – the side that’s whacky, fiery, fun and also earnest & revolutionary about gender politics. My Live this week was with someone who over a decade ago, read my blog and insisted that I was feminist even as I argued that I wasn’t. What a full circle! The video of our conversation is over here and it’s themed ‘The Awkward Feminist’.

I found myself re-living conversations with other feminists, notably this toxic group.

Among the many things I’ve learnt from that experience, it was to fear weaponised jargon. I once wanted to see feminism be as cool, as comfortable an idea as violent filmstars, misogynist Whatsapp jokes and unhealthy beauty standards. It is starting to be. And I’m realising that anything that becomes popular lends itself to the basest behavior. Popular feminism today is about gaining social value by attacking other people.

I’m happy the feminist cause expanded to highlight LGBTQIA, race & caste aspects. I also understand why mental health has become such an important cause for the world. We are grappling with realities that the generations before us never dealt with and at least some of that is caused by feminism challenging traditional status quo. But I don’t know how helpful it has been to conflate mental health activism with feminism. Because of the nature of mental health (& illness), it needs more structured learning than feminism. For example, feminism is often boiled down to “equality for all people”. Mental health can’t be brought down to a catchphrase and it would be a disservice to it to try. That’s how ideas like ‘toxic positivity’ and ‘trigger warnings’ get mangled into weapons of aggression, rather than tools of self-reflection & healing. ‘Anger is valid’ which originated as a way to acknowledge difficult emotions rather than suppress them, is used to justify violence and pass on the cycle of abuse. I am no medical professional but I can’t imagine that it helps anybody’s mental health to externalize aggression & wreak destruction.

A fashionable cause is a direct path to social value via outrage. This means the focus is on creating drama rather than reflection & personal growth. We position ourselves as heroes by casting someone as villain. Aggression has replaced introspection. And where does that leave feminism? It doesn’t. Anyone who intended to explore how they could be better and do better is gunned down in the rush for cool woke points. I always believed jargon is the refuge of weak people and cluttered minds. This jargon comes with the extra protection of fascism where saying “I’m triggered” or “You are problematic” shuts down all conversation. A battle of words was always going to be won by the better orator. But how did this become a battle against our own kind, allies and other feminists?

I wonder now if feminism becoming fashionable is a good thing, after all. It gave us wokebros. It also gave us violent crusaders who don’t care about the damage they cause. I call them friendly fire feminists. Shallow outrage & drama reap social rewards. There is no room for different expressions of feminism. How can one person (or group) claim to be the gatekeepers of an ideology? That’s what the worst organised religion offenders have done and that’s why they’re ‘problematic’ (a word I heartily loathe since it absolves the speaker of having to justify harassing or cancelling). Aggression overrules compassion and is poised as an expression of independence. I could argue that aggression itself is counter-feminism since it’s cruel, selfish and focussed on causing damage. Toxic masculinity prizes these traits and patriarchy puts a premium value on them. So to embody them, no matter what label you call yourself, is to uphold patriarchy. Friendly fire feminism is not feminism.

Some of the most thoughtful people I know stepped back from the cause. Because they don’t want to be attacked anymore. This is sad because this retreat is from attacks by other feminists, not the original enemy – patriarchy. This is devastating and a major blow to the cause of feminism.

One step in my feminist journey was to try to make feminist messages more accessible. Asking someone to change their lifetime status quo is big. And patriarchy & discrimination are not restricted to bloody battlefields. They permeate every aspect of human living, from our language to science to social structures to rituals to humour, food, body language and more. Doesn’t it make sense for feminism to do so as well? I found Instagram to be a fun, (mostly) non-threatening way to engage with other people. I regularly post questions & polls, often on the theme of the upcoming Live. It brings in so many insights, so much authentic sharing and is also a lot of fun! This week I asked people about their idols who had disappointed them and about ideas that sat in their grey areas of feminist/problematic. I uncovered some deep and conflicted feelings about sexualisation, quota systems/affirmative action, Rupi Kaur, JK Rowling, Kim Kardashian and more. We all need safe room to be able to examine how we feel and how can we do that if we fear attack?

As protection, I felt the need to issue the following announcement before my Live. This doesn’t come from consideration, it comes from fear. Fear that my Live will be hijacked by overzealous trolls trying to prove how feminist-cool they are by cancelling me and attacking the others in my Live trying to safely explore complex ideas. Friendly fire feminism is a bigger threat than patriarchy since the latter is more easily identified & blocked.

Mar 5, 2022 IdeaSmith
Is This Feminism Men, men, men Poetry Times, they are a-changing