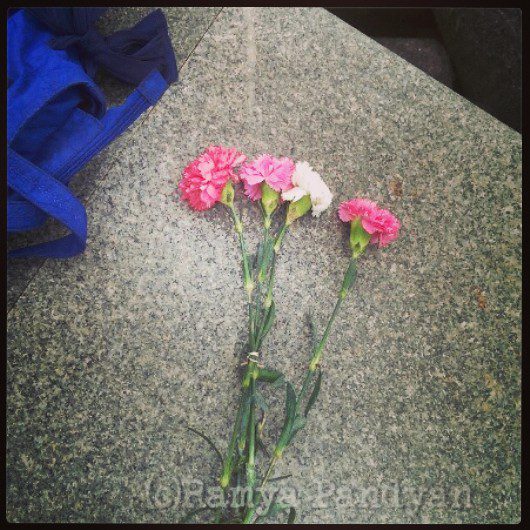 This article (‘Learning to Measure Time in Love and Loss‘) may seem rather formulaic, soppy and trite to some of you. Maybe it is. I know I’m a soft touch for stories like this. But I also think, soft touches are getting increasingly rarer in a cynical today. Independence doesn’t mean not needing anyone else. Freedom is not complete desolation. I know now that it is the willingness, even more than the ability, to take responsibility. It doesn’t come easy and it doesn’t have to be graceful or dignified. Jails are made of concrete, iron and glass. But imprisonment is attitudinal.

It has been a hard year after a bad one. 2012 was heartbreak and mourning and pain. 2013, in contrast was less like a bolt from a wrathful heaven and more like a run of very human bad luck decisions. Trivialities that have been as wearisome to carry as 2012’s burdens were hard. But it is over; it’s in the past. And as dad told me the other day,

“What happened in the past has absolutely nothing to do with how the future is going to be.”

Of course, he was saying that in response to my observation that I had always gone in for low tech, economy gadgets. But it’s just as true for anything else in life. Of note, I walked out with a MacBook Air. It’s not my first Apple gadget or even my first Mac, but it is the first time I’ve made the conscious decision to use a Mac machine (I hate Mactardism, just as much as I hate any other elitist, exclusivist attitude). In keeping with naming my gadgets, to reference The Hitchhiker’s Guide to The Galaxy, this one has been duly christened ‘Heart of Gold’.

Last night, I chatted with an old, old friend after several years. I used to refer to him as the otherself at one point. I asked him how he was doing. He said he had tried something new that day, a new kind of razor blade to shave. He said,

“Everytime you do something for the first time, it takes some time to get good at it. And you do it taking in all the detail, it’s exhilarating. It keeps you from thinking that life is routine.”

I haven’t had a first in a long time, I told him. But really that is a matter of semantics, isn’t it? There are patterns on patterns and once you’ve lived a bit, it can start to seem like you’ve seen it all before, like each day is going to be like yesterday and every person like the last one who hurt you. This article made me rethink that.

Another aside, I finally got around to trying Bitstrips, that various people on my Facebook timeline have been showcasing. It was fun! It wasn’t exactly a first. It is so much like a slightly modernised version of Stripcreator, the service I used to use all those years ago when I started the Idea-toons. I was doing those before people were speaking about visual content. And several others picked up the service after that and got positioned as the ‘pioneers’ of the craft. But I was there, I was there first, I screamed in my head. In the early hours of today morning, unable to sleep, I checked into Twitter. And I found most of the people whose tweets I really like don’t follow me back (they used to, once). It was a sour feeling, one I get every now and then. I got left behind. I spent a few minutes wallowing in the nostalgia of yore, when I was one of a handful of people around who knew about blogging, who was driving social media before it had a name.

Nostalgia. It’s a tricky quagmire, for people like me to get lost in. I need it. It fuels me, it sustains me, it gives me a sense of self and identity. And yet, I must keep it from overwhelming me since it is after all, recycled experience. So I pull on a light nostalgia jacket (it’s soft-lined) and head into the grand adventure of the future. Even if it looks the same, I don’t know it right now. And that is what makes it worth living into. Besides, I got a Heart of Gold and it’s powered by the Improbability Drive. 😉

And here now, the Idea-toons are back in a new grown-up avatar.