“One ticket, please”: Why I Love Solo Dates 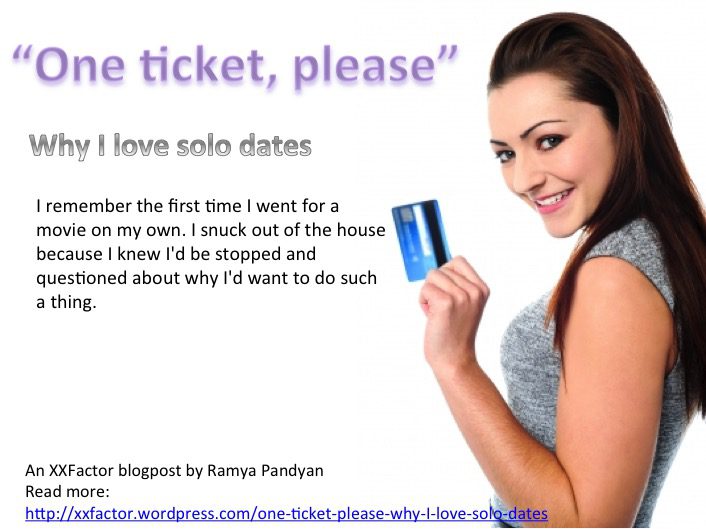 Images via stockimages on FreeDigitalPhotos

I read an article once about elephants that are bred into captivity. When an elephant is young, its leg is chained to a staff in the ground. At that stage, the chain is strong enough to hold the young one and cannot be broken. When the elephant grows up, it is strong enough to pull down trees so a simple chain and staff possibly cannot hold it. Yet, the elephant never tries. The manacle is in its mind and it never occurs to the elephant that it can be broken now. I often think of this story. It seems I keep discovering chains that were imposed on me early in life, that I now can break but just haven’t thought of doing so. Recently I had an interesting conversation with a girlfriend. I asked her if she had ever gone for a movie on her own. She hadn’t. But she had traveled around the world on work by herself. She had lived in Europe for a month on her own, a vegetarian from a tropical city, surviving in a cold, meat-eating place where the language was foreign to her. She did well for herself. But it had never occurred to her to spend three hours in a theater next to her home, alone. She paused and said,

“My sister is not like me. If she wants to go for a movie, she’ll find somebody or the other to go with her. If nothing else, she’ll take my mother along.”

Not quite the same thing but I could see where she was coming from. Her sister, who she described as bolder, would at least try to make something she wanted happen. My friend, dismissing it as just something she wanted, probably wouldn’t make the effort she’d otherwise make if someone else wanted it.

I remember the first time I went for a movie on my own. I snuck out of the house because I knew I’d be stopped and questioned about why I’d want to do such a thing. I still remember the movie I went for. It was Socha Na Tha, a romance flick that was also the debut vehicle for Abhay Deol. It was an Sunday afternoon show at a multiplex, not far from my place.  I could really have found other people to accompany me. The movie wasn’t one that I needed to surreptitiously watch. I knew all of these would come up as reasons to question why I wanted to go for a movie on my own. So I slipped out and didn’t tell anybody about it. On my way to the theater, I imagined people would turn and point to me or whisper in corners. No one did, of course. The ticket-seller didn’t even bat an eyelid when I self-consciously asked for a single ticket to the show. And when it was over, I felt an exhilaration that I could not explain. I was hooked. In the next week I caught Kal Ho Na Ho (which wasn’t even that good and I had seen it before). I cried in the theater when Shah Rukh Khan died. After all, there was no one around that I had to be intelligent and strong for. Soon after, I discovered early morning shows that the multiplexes showed at discounted rates. My solo movie dates extended. I’d get up as early as 6a.m. on Sundays, buy myself a ticket to the early morning show then browse at the bookshop later, eat a sandwich in the mall’s food court while poring over my purchases or just thinking about the movie. And before I knew it, it would be early evening and time to escape the weekend shoppers. I’ve rarely enjoyed anyone else’s company that much and never that many times. I really am wonderful company for myself and this is something I discovered only when I took myself out on these Sunday dates. Occasionally people still react with surprise when they find out that I do these things on my own. Some of them are offensive even, without realizing. I get rolling eyes, shaking heads and looks of pity with “What, you can’t find anybody to go with you?” writ large on faces. I’ve stopped trying to explain this. But once in a way, when I meet another woman that I think might be willing to drop her society-imposed judgments and listen, I talk about this. Incidentally, my friend did say one thing that made me envy her. On her return from Poland, she was booked on a 4 a.m. flight. She checked with the hotel and was told that there would be no public transport available since the airport was within walking distance. What about the odd hour, she asked but she was met with looks of surprise. Eventually, she stepped out onto a snow-covered road and wheeled her suitcase all the way down to the airport alone. It was only a ten minute journey during which there was not a single other human being in sight. She said she couldn’t imagine being in such a situation, being allowed even, to be in such a situation in India. I know what she meant. Even on my single dates, I’ve never been truly alone. There are always people around. Places that have no other people become automatically restricted to women. She has the good fortune of having had an experience that I may never have. 🙂 So I stick to solo movie dates. At least, in a darkened movie theater, I’m on my own.

2 thoughts on ““One ticket, please”: Why I Love Solo Dates”