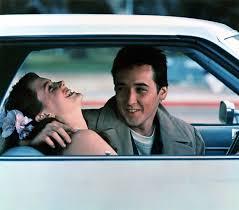 I read a really lovely book, featuring a club of men in traditionally macho professions (sports jocks, nightclub owners) getting together to learn about women and relationships by reading romance novels. The premise tickled me and its chicklit style carried me through well. Most of all, I found myself feeling very warmly towards men in general.

A couple of weeks ago, I started watching ‘Say Anything’ after having heard so much about it in popular culture and the famous boombox-over-head scene. I didn’t expect it to be this…intimate. The storyline wasn’t actually as dramatic as some of the other big names in the romcom genre. But the scene where the couple makes love for the first time wrung my heart out. Because the camera shows us the guy’s face, speechless, eyes lowered, only feeling. She says, “You’re trembling.” His response, delayed but seemingly on autopilot – “No.” She smiles and says, “Yes, you are.” and she wraps the blanket around him. I haven’t stopped thinking about that moment. It was a moment of tenderness but that’s not new. What’s new is that it was a moment of male tenderness. Of touching honesty, of authenticity and vulnerability IN A MAN.

I’m realising now, it’s what I liked about the Bromance Book Club series too. I haven’t seen enough male vulnerability. It certainly doesn’t get shown to us in books or movies or shows. Most men refuse to acknowledge it, let alone parading it around. I’ve encountered rage and cruelty and grief and control issues, all of which come from feeling scared and hurt and vulnerable. But never vulnerability openly shared. It’s hidden like it’s a shameful flaw.

And yes, perhaps I’ve done my part in attracting only the damaged that stifle their vulnerability, the best part of themselves. Perhaps I haven’t been kind either about letting these men feel like they can share. I’m not taking on the blame of the bad actions of some of the men I’ve dated. But I’m thinking, it’s like living with a bowl upturned over your world and seeing only the people stuck inside with you, bouncing off the edges and colliding against you.

There’s a world within men I’m yet to discover, though I think I’ve glimpsed it here and then with people who aren’t romantic partners. Friends, colleagues, relatives. Maybe a romantic/sexual relationship is the hardest one in which to share your vulnerability. But it’s also the one that lets you turn it into the deepest intimacy.