Love Is An Intergalactic Negotiation 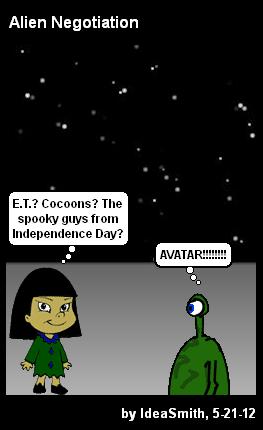 Being in a relationship, it’s not easy at all. No one said it would be easy. Umm, actually it was implied. Love as the grand jackpot waiting for you if you played your cards right. That was a big hoax.

It’s more like having intergalactic negotiations suspended in the far reaches of outer space. You speak a different language from the entity seated at the other end of the table (or whatever it is they use in intergalactic negotiations). You have a few handy tools, sights reported by those who’ve been there. But it’s not until you shoot in through that door you realize something fundamental. None of those sightings have been of this particular alien. They’re all of the hundreds and thousands of other life forms that are alien to you and each one, like this one is different. You’re all on your own now.

No way to tell if they’re hostile or friendly. No way to interpret what a gesture is intended to convey and what your response will trigger. How then, is trust, a hidden but integral part of any negotiation, learned? You take a chance and dive the heck in.

Gridlocks happen, just as in every kind of negotiation. Confusion and mayhem may reign. Each side may leave much worse for the wear and just a bit poorer. And yet we continue to strive for exploration, for communication, for connection, for peace and harmony. It is the very stuff of life after all.

Besides, did you catch a glimpse of the stars when you were out there? You’re so small, such an insignificant speck in the galaxy. But it was you out there on that dangerous, volatile, gut-clenching adventure called LOVE. You earned your place in the cosmos.