Skip to content
Being Woman On a lighter note.. Vanity Unfair

I Want To Be A Modern, Female Superman… 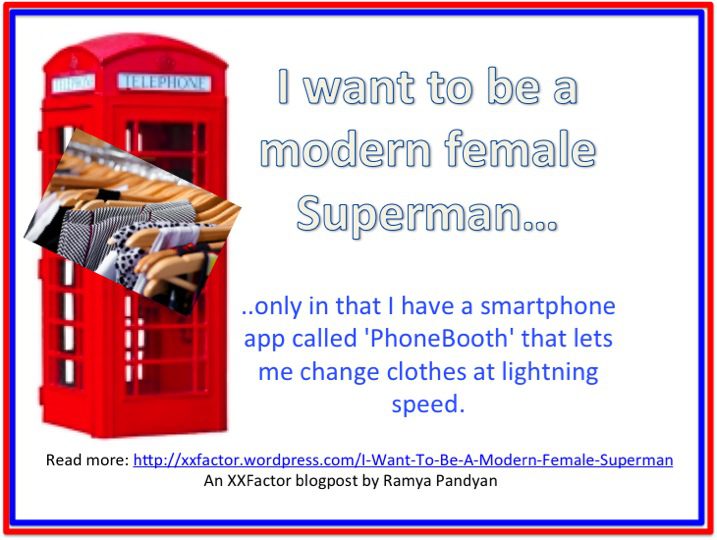 …only in that I have a smartphone app called ‘PhoneBooth’ that lets me change clothes at lightning speed.

No, this is serious. I am friend, businesswoman, creative thinker, socially aware voice, family woman, hot single girl, gal pal and a host of other things. Each of these come with their own dress code. I exercise my individuality adequately in each uniform. And I exercise the rare privilege afforded to few Indian women, in just being able to be so many things.

In addition, I’ve come around to accepting and then even embracing vanity. I am a woman and impressions about me are formed and sustained by my physicality a lot. How I look determines a large part of the response I get. I’ve been a marketing professional in another lifetime. It would be silly to forget the lessons from then. When packaging plays such a large part of reactions and hence relationships, I would be a fool to disregard them. Also, it’s not worth the effort of dealing with the backlash of wearing something that people don’t deem appropriate for an occasion.

I’ve found a comfortable zone now, where I know what to wear that is the right blend of appropriate, individualistic, practical and eye-catching. To almost any situation that I find myself in. I’m also a compulsive organiser and juggle several engagements as efficiently as I can.

Where it gets tricky is when different uniforms jostle for consecutive time-space on my calendar. Time planning now involves not only figuring out optimal routes of travel, energy level/mindframe required for that particular engagement and location feasibility, but also what I can wear that will cover everything adequately.

Take last week for instance. I had a semi-casual meeting with a friend who I’m helping out, professionally. Lunch was on the cards with some old colleagues. After that, I was to have a conversation with a prospective client. Then, I had to proceed to cultural event with a networking session among artsy/business people. All of this on a scorching day in Mumbai, at locations clean across the city. What could I wear that wouldn’t crumple or drench me in perspiration, look formal but not severe, would be casual enough to be friendly, seem cool and also arty? I thanked my stars that I’d begun wearing sarees last year and picked out a Kalamkari cotton. Sarees work like Superwoman costumes (complete with capes). Nobody in India questions a saree. It’s considered dignified for any occasion. I was counting on my personality and general rarity of women in sarees to pull off the individualist vibe. It did surprise my colleagues a bit but overall I think it worked.

My last two jobs had little to no dress restrictions, which allowed me to practise, even perfect this perfect-for-every-occasion look. I managed to go seamlessly from train travel to client meeting to afternoon-behind-computer-screen to partygoer a few times. Accessorising helped, as did layering with such delightful things like scarves, dupattas, shawls and shrugs. Summer brings its own challenges though.

Next week, I have a casual date, a feminist play and a kids birthday party to attend. It’s not for a few days but I’m going to need that time to figure out what I can wear that will work for everything. Sarees are out (I could work a draped length of cloth anytime with safety pins but NOT around toddlers). So are jeans (what, are you crazy in this weather?). What does that leave? Dresses or skirts? Hmm, mostly okay but these might bring in more undue attention than required, while travelling back. I still have some time though.

*Sigh* That’s why I wish I had a phone app, that allowed me to dart in and out in a matter of seconds, rocking a new look each time. Tech-entrepreneurs, are you listening?

4 thoughts on “I Want To Be A Modern, Female Superman…”