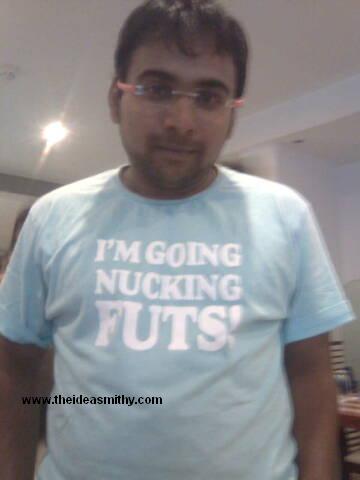 I was just about to give up on this section as I found it rapidly running out of options. What’s more, it has gotten a little tiresome to discover that even the wildest of us only show our individuality in our footwear!

Then, like a ray of neon, electric-strobe light, Sushant waltzed in. Let me introduce you to my pal. I first met Sushant at a formal dinner with friends, where another member of the gang was all set to introduce us all to her fiancé, Shawn. Sushant strode into Del Italia a little late, grabbed Shawn and demanded,

(Is it you, you’re the reason I’ve had to wade through traffic?? – okay, forget it, it belies translation from Bambaiyya)

(Yeah dude, why the hell are you so late?)

Needless to say they hit it off like a house on fire. Somewhat appeased, Sushant turned to the waiter serving us tall glasses of wine with our pasta and asked,

(How about ‘bitings’ with the booze?)

The waiter, I’m afraid, not in possession of Shawn’s oratory skills was left dumbstruck and returned a little later with the requisite ‘bitings’.

So this is the rockstar of the group, Sushant. The last time the gang caught up, Sushant sauntered into Bombay Blue and I whooped with glee.

The tee-shirt titled ‘I’m going Nucking Futs!’ would have been enough to get anyone into I Style! But Sushant takes it a few steps further. Tag Heure ke chashme, woh bhi orange framewaale, kya baat hai, boss! Here’s the man himself, giving us an Emran Hashmi look.

Sushant, saviour of I Style!, you’re truly Futs but you’re a rockstar!