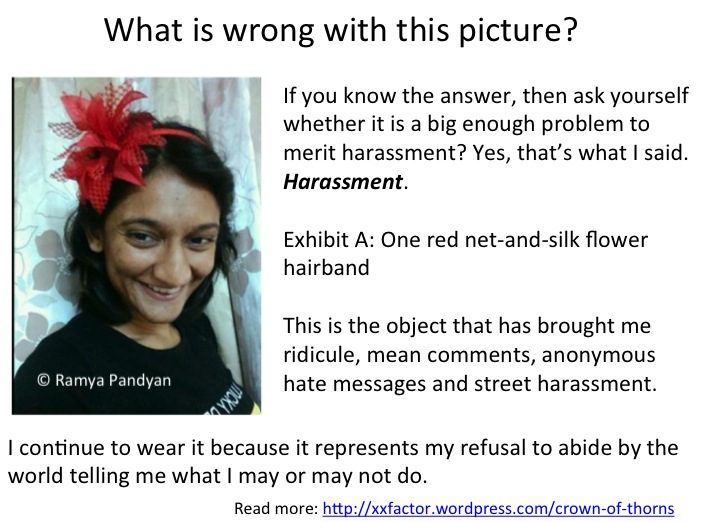 Over a year and half ago, I bought this accessory on a whim. It comprises a red flower made of net and fabric, attached to a thin red headband. Like all things bright and red, it caught my fancy. I wore it several times in the next few days. It made me feel like a queen. After all, a headband is a sort of a crown and this one is in my favourite colour.

The reactions that wearing this provoked, continue to this day. At first there was astonishment. I didn’t pay it heed. There was outright gaping. I ignored it. Then came the laughter, right to my face. It didn’t bother me. When I refused to get angry, the jokes got mean.

People stopped me to ask what manure I applied on my head, so a garden would grow there.

Someone sent me an anonymous note asking what was wrong with me, wearing that red flower on my head.

Two strange men on the road stopped right in front of me and refused to budge. I walked around them. They turned around and returned to walk next to me, pointing at the flower and laughing.

I wore it to coffee with a close friend who kept insisting I take it off and put it away. Two others refused to walk on the same side of the road with me, until I took it off.

A female friend would not stop telling me how inappropriate I was being, by wearing this. We were at a play and most of the time before the play and the interval after was spent in her trying to get me to remove it.

Recently, a friend who hasn’t seen me in over a year, forwarded a fashion pundit’s claim that ‘flower crowns are a major fashion faux pas’.

I want to know what about this innocuous red headband provokes such violent sentiments from people. Why do friends and colleagues think it is okay to badger me about a minor aspect of my appearance? These are intelligent people who consider themselves forward thinking. Do they realise the meaning of their actions?

I am not breaking a law by dressing indecently. I am not wearing anything that could offend anybody’s religious sentiments. Beyond that, why should what I wear be anybody’s concern? I realise that most people do not like the way it looks. They have a right to their opinions just as much as I have the right to wear it. Why are they allowed to get away with statements like ‘it offends my eyes’? I find men peeing in public far more offensive. And I find the attitude that other people dictate what I wear, most offensive of all.

And finally about the fashion faux pas bit. I refuse to conform to what a fashion pundit or a style magazine says. Why does that give everyone the right to deride me?

It also reminds me of another occurrence over ten years ago. When I started working in 2000, I began wearing scarves draped/knotted around my neck, with formal shirts and trousers. I had seen the style in a few international magazines and movies. Nobody I had seen in real life wore them and I had to go to some trouble to find those scarves. Later, I went back to college to get an MBA degree. I continued the same style of dressing. The teachers and students uniformly believed that sarees were the only appropriate wear for presentations. I was the first female student to wear trousers to a class presentation. The scarf around my neck had become my signature style. One of my male classmates said I looked like a ‘rowdy’. Another said it looked ‘raapchik’. The adjective got appended to my name. Then two of them asked me what my rate for a night was.

This incident may sound extreme now. You’ll probably think my friends and classmates were country bumpkins from back of beyond. But this was at a time when Indian women did not wear scarves to work. The only reason I stopped wearing them was because all the hospitality services (retail, restaurants, airlines) adopted the style for their uniforms. Today, the scarf-around-neck style is synonymous with a service person in one of these industries. Hence it is ‘normal’. But because I wore it when it was not, harassment came my way. It feels like history repeating itself.

I realise this seems like a trivial thing. Most people would ask me why I don’t just stop wearing it. But that is precisely the point. Would any man be hassled this much over a minor article of clothing? I posted a Facebook update about this. And while I was typing up this post, a friend responded to the update asking why people had lost their joy and whimsy. She nailed it. That is why I wear it. It makes me feel good. It cheers me up.

Her comment made me realise a broader issue. The only men I know who may have faced something similar are a few brave gay men. Earlier in the month, a man was hauled over by the cops in Chennai and beaten up, because they didn’t like what he was wearing (Read his account on Gaysi). I want it to say, it is the same thing. We are all supposed to follow rigid rules on how we appear and any deviation is considered punishment-worthy (even if the law does not explicitly say so). There is so much difference-shaming that is considered normal and anybody who refuses to be perturbed by it, is the troublemaker.

Here is a picture of the now famous headband. It’s unwittingly become a crown of thorns for me but I refuse to hide it away.

Feb 19, 2022 IdeaSmith
Being Woman I'm An Indian Woman Is This Feminism Media Messages Men, men, men Poetry The Sisterhood Times, they are a-changing

One thought on “Crown Of Thorns”