Skip to content
Battle of the sexes The Sisterhood Times, they are a-changing 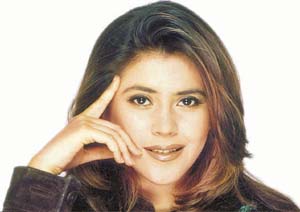 I saw a re-run of Koffee with Karan‘s show with Ekta Kapoor. I had read Sakshi’s observation on the first viewing already so my curiosity was piqued beforehand anyway. I have to say, I was mighty surprised.

Somehow, I’ve always carried an impression of Ekta Kapoor as a rather maudlin, unnessarily brash woman – a power-hungry, irrational, emotional in the way that puts off and even scares other people away. All of these fueled perhaps by her soap-operas (which certainly fit the above description) and interviews quoting her saying..

We hate men! We don’t hire men here except for very lowly jobs.

….which made me wonder then, whether she realised that sexual stereotyping and gender bias worked both ways.

I was wrong. The lady on the show was nothing else, if not in control…of herself and of the situation. It is a fact that the three other guests (Ronit Roy a.k.a. Mihir Virani/Bajaj, Ram Kapoor of Jay Wadia fame and Hiten Tejwani, one of the home-grown Balaji babies) are on her payroll. True too that they paid dutifully paid homage to her, stopping just short of kissing her feet. But I still have to say, I like Ekta’s style.

She is smart, no doubting. She knows what she wants, she knows how to get it and hell, she knows bloody well that she pretty much has most of it already. What’s wrong with being good and knowing it? I was most impressed by how unashamed she was of herself, the sucess of her company and her strong viewpoints. Yes, the woman certainly has a mind of her own (no, my earlier notion of her being a ditched-by-a-man-and-thirsting-for-revenge-on-all were dispelled) and she speaks it. She’s not coy or overly diplomatic but she does know how to control a situation and a conversation. Intelligence, confidence and power…..hmm, I could always respect that.

I was most amused to see that the one moment where she visibly stopped herself from saying something was when Karan called a break with,

Behind every sucessful man, is a woman. Behind Ekta Kapoor are three men! And now that you have three good-looking, smart men with you, what more could anyone ask for?

But who said I needed a man …or three…to be sucessful, darling? I pay their salaries, not the other way!

I do have to add here that I don’t carry any illusions about her being very nice or likeable as a person. She’s known to be a hellraiser at work, a bully boss and an obsessed workaholic. I’d like to point out however, that this also describes several men in positions of leadership world over. Why single a woman out for being that way? Oh perhaps our text-books tell us how companies have been hiring women for years for their gentleness and non-aggressive way of doing things. Bollocks to that, then since there are men who claim to be gentle and non-aggresive, so it follows that there will be women who are openly confrontational and direct too.

I also liked her views on working with women and men. According to Ms.Kapoor,

Men are like babies…very emotional. They’ll get very upset over not liking their role, feeling nobody cares for them or having issues with me – and they will want to quit over these. Women have these issues too but they won’t quit for them. Women are generally more practical that way.

I completely endorse that. If anything, at the risk of generalisation, a woman is probably far more likely to be ruthless and tenacious about what she wants than a man in the same position. Ekta Kapoor suffers no illusions – or fools.

I was also pleasantly surprised to watch her talk about her programs. I always imagined I’d be ashamed beyond measure if I were producing the kind of trash that the ‘K-serials’ are. And yet the fact is that they sell, they’re the most popular shows on air and Balaji Telefilms products rule the roost on Indian television. No one says you have to buy your own product. When in business, all you need to know is what your customer wants and be able to give it to them as they want it. Bravo, again! Committment to the soap operas as a product of her company but not as real ideas in themselves. Everyone on air had a good laugh on the age leaps, the unbelievable plot-lines, the larger-than-life Balaji characters and of course the inimitable Ba (of Kyunki Saas bhi kabhi bahu thi) To be able to laugh at your creation, requires a great deal of ….something. It could be detachment and it could be maturity or even wisdom.

So I raise a toast to a woman who knows her mind, isn’t afraid to speak it or ashamed of her own success (or how she gets it). Here’s to a new icon…the non-coy unabashed Alpha Female.