Skip to content
Battle of the sexes Gender Archetype On a lighter note.. Survival Guide The Dating Game 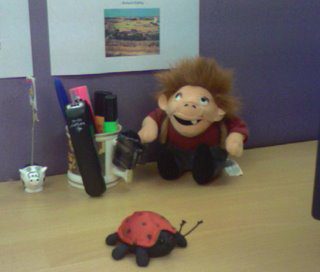 Do only men play games? Are women the only ones being objectified? I think not. Girls like their dolls, their doctor kits and their kitchen sets as well. Okay, that’s sexist, I also played with building blocks, finger paints, balls (errm… 🙂 ) and several other unisex toys. Did I ever grow out of it? Did any of us?

Remember shielding your toys, dolls and self from the little boys’ kicks and punches? Hmm….maybe we’re back in the playground, but with a heart instead of a doll and slightly bigger boys this time. If our relationships are a reflection of the games we’re used to playing, maybe the people we date are images of our favorite toys. Who then are we, by the toys we play with?

My lovely monster, my adorable scumbug, my cuddly creepy-crawly

I was delighted to find a series of monster-doll stuffed toys and started a collection. Besides the Hunchback seen in the picture, I also own a green Frankenstein, a lady-bird sandbug, an outrageously plumed rooster, a green dinosaur with red spikes and an owl with a graduation hat. My favorite doll (that I still have) had an unruly lock of hair carved into the top of its head and all otherwise, it was bald. Yes, I do like imperfect objects, weirdos…and flawed men.

Some little girls play with plastic dolls. Some of them grow up and play with plastic cards and the styrofoam men who own them. Sugar daddies abound for the PYTs who never got over their addiction to plastic. Life in La-la-Land is just fiddle-dee-dee, isn’t it darling?

Touch ME not, touch MINE not!

How about those annoying, prissy kids that mum was always wishing we would become? The one who always put his toys away in order, the one whose dolls were always nicely dressed and neatly arranged. You hated her didn’t you? I did too. Especially since she wouldn’t let me get my grubby fingers anywhere near her precious beauties. Come to think of it, she didn’t do much more than stare at them in her perfect dollcase either. She had a fairytale marriage, complete with Snow White style wedding gown to Mr.Ken doll. 😀 Presumably she and her darling boy toy do nothing more than look at each other in absolute adoration and live happily ever after.

I want the one she wants!
Then there’s the girl who seems to want just the guys you want. He’s ‘just someone’ until he becomes SOMEONE to you. Then he’s the one she’ll want. She would be the kid who always wants the toy that the other kid has.

The collector
Then there was this weird childhood conversation. Comparing notes like all little girls besotted with an abnormally shaped piece of plastic called Barbie,

I’m making a new dress for my doll. Do you have a Barbie?

Of course that was the ‘I have more than you!’ kid. Know someone who is the male equivalent of a bed-post notcher? Bingo. She grew up and collected boyfriends instead.

The trophy-holder
Everyone knows the kid who always wants the biggest, prettiest, bestest toy that there is. This isn’t greed, it’s ambition. They usually get them, don’t they or they just won’t play with anyone or anything else. Yup, some people hold out for the best always or die of sheer frustration and unrequited expectation.

4 thoughts on “Toys and boys”