May 18, 2015 Goodbye, Letting go of people, Moving away from the past, Osho Zen Tarot 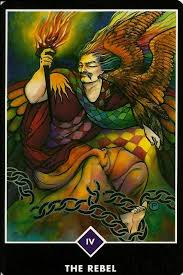 I started this year facing up to something I have feared all my life – the word GOODBYE. I let go of a lot of people. Each of them was big in my life for some reason: a long running friendship, mutual dependency stemming from longtime favour-bartering, a because-we-never-had-a-fight relationship. The list goes on and I can see that even while listing, it starts with fondness and then devolves into reasons to not be fond anymore. That’s exactly how those relationships went and I finally summoned up the energy to amputate them from my life.

One of them kept coming back to me. Phone calls I wouldn’t take. Messages that I tried to ignore. WhatsApp messages that I refused to read so they wouldn’t even see the blue tick and feel like it was a response of a sort. “Assume I’m dead! Assume I never existed!”, I have wanted to say to them without having to speak or even see them. Because, that’s what I’ve done. I’ve realised that goodbyes are the same as deaths. Rip the band-aid off, make a clean break, however you want to call it. It’s over when it’s over and you walk away without looking back. That’s all.

This person’s persistence both annoyed and scared me. What did I have that they clawed at me so desperately? Should I walk about in fear that this unknown treasure would be looted from me? More than once in the past few months I’ve had to take a deep breath and stuff away a panic attack. There’s nothing as scary as other people’s fears.

A friend mentioned that people from smaller towns seemed less inclined to walk away from relationships. This is usually used to support notions that paint metro people as cold, unfeeling machines. I pondered this for weeks. I live a crowded life in a packed city in an overpopulated country. There are 7 billion people on this planet, a statistic that I’ve recalled to mind often. None of us is indispensable. Life goes on, regardless of deaths, natural calamity, marriage, relocation, failures, successes and other things. We adapt, we cope and we build new lives constantly. We lose people frequently and we replace them with others, just as we are being replaced in other people’s affections and situations too. Where is there need to panic when a relationship doesn’t work out or if a person makes you deeply unhappy? There will be hundreds of others to explore and experience and thousands of other lives to touch. I guess being a metro person makes me constantly aware of that.

This does not make me cold or insensitive. Months after letting go, I still find myself struggling to cope. My life feels light and airy, just like the insides of an old tube that is riddled with holes. People-shaped holes. I frequently find myself wanting to run back to one or more of them. It takes all my willpower, ego and escaping into work to do that. Because at those times, all I can remember is the good times at the start. Memory deludes you that way. But like everything else, discipline helps and now I find, shortly afterwards I’m able to also recall the lying or the taking for granted or the incompatibility or whatever else was a reason to say goodbye. This is feeling a lot. ALL THE TIME. It’s like being the sole survivor of a plague that killed everyone else in your world.

I had a disagreement with another friend recently when he didn’t respect my time. Later, he asked whether I would have let him go over an incident like that. I told him,

He agreed. But he also said that he would try and work it out with the person, instead of cutting them right out of his life. I thought about that and I realised that’s exactly what I believe I’ve done for years. It has been a wasted effort in a lot of cases, throwing in more time and energy into already bad situations. Especially but not limited to my romantic relationships and these times have left me not just with wasted time but worn threadbare of joy, self-esteem and good health. I’m afraid to take that chance on most people now. It seems like the less brutal of the two evils to just walk away. So I mercy kill the struggling moments in my life and I walk away. I’m the Goodbye Warrior.

Science tells you that a drop in pressure sucks in air from outside. Similarly I find the clearing that has been created in my life (that I’m still trying to settle into) is attracting all manner of things from outside, similar things. Needy people, desperate relationships, negative spirals. I don’t know how to deal with them. I haven’t yet learnt how to say, ‘No, enough’. Goodbye has been such a big lesson to learn.

I find some kinship and perhaps some direction in the Osho Zen Tarot card ‘The Rebel’. Of this card, the book Tarot in the spirit of Zen says,

“The rebel is renouncing the past. He is not going to repeat the past; he is bringing something new into the world. The past has destroyed the beauty of the word responsibility. People have made it almost equivalent to duty; it is not really so. Duty is something done reluctantly, as part of your spiritual slavery.”

2 thoughts on “The Goodbye Warrior”