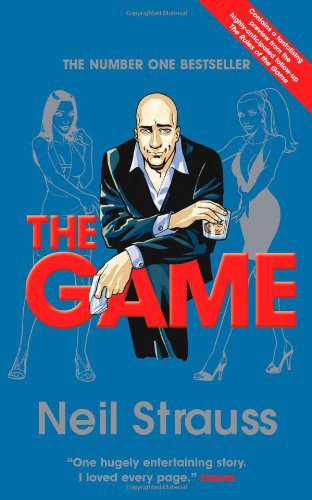 I first heard about ‘The Game’ by Neil Strauss on one of the American sitcoms (5:30–5:59). And then in another. Always the mocking tone, always in the context of battle-of-the-sexes jokes. It piqued my curiosity and ignoring the raging negative feedback online, I bought the book. I told myself that it would be good research into the psyche of the kind of man I need to avoid.

The Game is written in an autobiographical style by Neil Strauss who claims to have stumbled onto an underground society of pick-up artists, while researching a story. He then goes undercover and becomes one of them, seemingly to explore the world from within. Very quickly, he (now called ‘Style’) rises to one of the ‘top guys’ in the community and began conducting workshops and mentoring other aspiring pick-up artists. The book does not actually provide a logical how-to for men but rambles on like a travellers’ journal in a foreign world. This was my first clue. What does it say about the author if he’s claims to be a star in a world that he’s constantly trying to detach himself from?

Very quickly the book’s protagonist is identified and formed, one Mystery, self-styled pick-up guru. In truth, this character is needy, diffident, emotionally stunted and unable to function without constant mollycoddling either by a girlfriend or Strauss/Style himself. There is neither any evidence within the plotline, of Mystery’s abilities nor any explanation for his supposed successes with women. He dresses like a buffoon, opens conversations with inanities and spends much of the book throwing tantrums, being depressed or making a fool of himself in public. This was my second clue. Is Mystery based on a real person or is an alter ego of Strauss himself? Fight Club flashback, anybody? Nah, Strauss does not have Palahniuk’s flair.

Just as the mutual male whining begins to get to the reader, an occasional female pops up, having been waylaid with a whole gamut of performing monkey style tricks and ridiculous lines. A couple of these tricks seem intelligent enough, from the most manipulative point of view. ‘Negging’ or paying a woman a backhanded compliment/insult to throw her off and have her seek validation from you, is probably the most famous of these and the one that made it into pop culture references. But for most part, the pick-up artists’ so-called art appears to be nothing but a series of actions that scream “Please, please, please pay attention to me. If you don’t, the other boys will make fun of me!” They may as well have called the book ‘A little negging, a lot of begging’

And just as abruptly the story swings into a ridiculous fantasy called Project Hollywood, a mansion whose sole function appears to be to host parties overrun by beautiful women and alcohol. How they manage to set this up and realise this is not very well explained but its descent into seediness is well-chronicled. Magically, Strauss/Style himself meets the Perfect Woman (intelligent, beautiful, smart, vulnerable etc.). Her perfectness only comes from the fact that she changes character every couple of pages to suit whatever revelations he is having. There, clue three. Who here believes that this woman is real?

The book ends with the ‘bad guys’ getting their comeuppance from the tax collectors, other competitors being vanquished by their women leaving them, Mystery himself narrowly escaping his doomed fate and Strauss/Style jetting off into the sunset with the Perfect Woman. Hoo boy, if this is what male fantasies are like, no wonder so many of them are so angry all the time.

Read The Game if you:
– enjoy female fantasies of vampires & werewolves and have read all the available books around them
– want to to throw in ‘The Game’ references to sneer at men who trying negging
– are concerned the pick-up artists are intelligent, powerful men who may take over the world (you’ll sleep better after reading ‘The Game’)