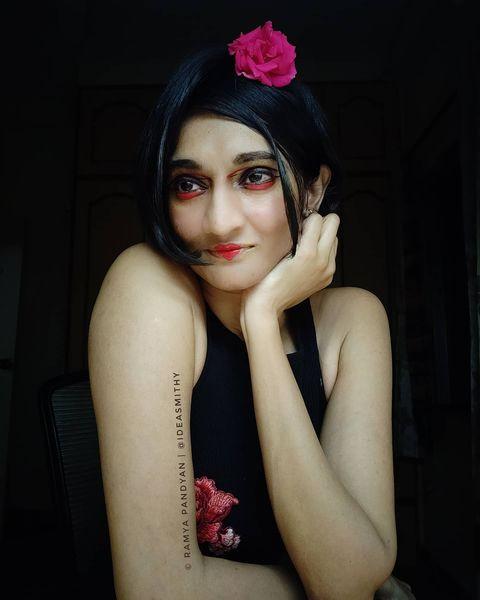 I found my kinship with green things when I was 8, watching fascinated as baby shoots poked out of the mud laid on a try, where I’d sprinkled mustard seeds a few days earlier.

About 10 years ago, a doctor having his yard renovated, handed me a sprig of ajwain, saying it would aid the cold I was having if I put it in my drinking water. Instead I stuck in a pot, layering mud I scratched off the ground. That herb parented the many plants that have kept my company & given babies that I gave to select people to start little green paradises of their own.

You might think a love of green things would include flowers but oddly, it didn’t. Flowers were things I saw enchained in garlands at weddings & political functions, strangled into wreaths or bouquets for sombre occasions, reminders of rules that were oppressive.

At 28, a boyfriend told me white lilies were his favourite flower. I was charmed by this glimpse of tenderness in an otherwise brutish masculinity (boys’ school, engineering college, investment banking). I sent a modest bouquet of 3 white lilies to wait for him at his office desk on Monday. I received an angry call from him calling it inappropriate & me, desperate.

Years later, I shared this story with a healing group. They awwed. 3 men of different ages approached me later to tell me not to be stopped by this. Men like nice things too, they said, it’s a lovely gesture. I began tentatively taking flowers to some people I trusted. A single gladiola with lunch, a pair of yellow gerberas while dropping off a book.

5 years ago, as I began processing old hurts, I realised my garden had never had flowers. It was now a thriving Eden of sturdy herbs, proud vegetables & an occasional succculent. Like me, it was strong, resilient, protective. But it wasn’t gentle, cheery or inviting. That’s the domain of the flower, the plant kingdom’s personal mating call.

And so, tentatively, I welcomed romance, the very idea of it into my garden & my heart.

This is part of a series called #ARomanticLife exploring our ideas of romance, its media depictions and how they impact our lives. There are also posts over at my other blog The Idea-smithy and two Live conversations (Rajni Arunkumar, TJ Coulagi)