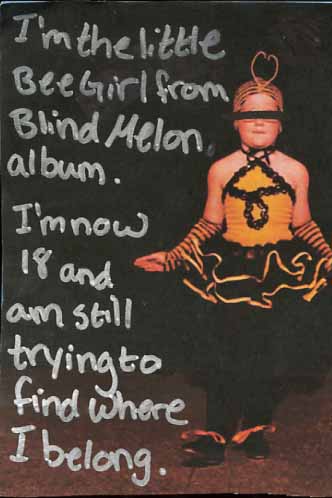 I found this on the Post-a-Secret site.

And then I found this on Wikipedia:

The song was written originally about the girl (Heather DeLoach) who was famously featured in the video for Blind Melon‘s hit single “No Rain“.

Before performing the song at the 1994 Bridge School Benefit concert, singer Eddie Vedder commented on how they “saw really bad things for her future.”[1] Further, in a 1996 radio interview he explained,

“The Bee Girl was…she was this little girl who was 9 years old in a video and I saw her, I saw how…there’s no other word for it–how obnoxious she was and she loved being a star…and I knew it wasn’t going to last and my heart went out to her and I was just trying to tell her, ‘Man, that ain’t the most important thing in life. It can’t be. You’re gonna die.’”

Vedder explained in the liner notes for Lost Dogs that he once met the young girl and her mother. His information on the song closes with the sentence, “I hope she’s fine.”

I was never a fan of Blind Melon…in fact I probably wouldn’t even remember they were a music group unless I saw them on a music channel. I wouldn’t remember the name of the song or its tune either. But I remember this girl. And then, the video that she starred in. It didn’t make much sense to me. At least not in a way that I could put into words. But it left me with a feeling of undeniable sadness. It had these poignant images of a little plump girl dancing rather awkwardly, being laughed out, standing alone and staring forlornly. I could understand that picture so well even if I couldn’t give the emotion a name. And the video ended with the little girl scampering in a field.

When I saw this postcard, it wrung my heart. There is sadness that can’t be defined or talked about. The burden of loss, of never having had in the first place, all the angst of love (being in it, not being in it, falling out of it, unrequited love) and the very real pain of being unwanted.

I wish I knew the girl who wrote this card. When I saw the video, I saw myself in her, way back then. I wish I could tell her that life would change. Maybe she wouldn’t lose weight or be a graceful dancer ever. Maybe people would never stop laughing at her. But in time, she would learn to stop caring. I did. Yes, but about finding a place to belong….I’m silent.