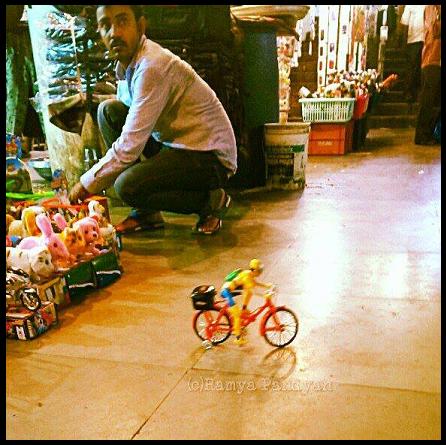 Foot notwithstanding, I’m determined to churn out a story. Here goes today’s:

Sandhya and Dhiraj are rushing to class. It’s 9:05 already and the crowd from the 9:03 train is still spilling out of the station while the 9:11 local’s welcome committee battles them. Sandhya turns to look back towards the general compartment but she can’t spot Dhiraj yet. She moves along reluctantly, pushed by the crowd and finally finds a firm footing at the edge of the ticket counters.

Rashid, unfurling the tarpaulin, hears her irritable paper-shuffling. She is pretty easy on the eye, long hair constantly getting pushed back from her face. A piece of paper slips from her fingers and floats over to him. He ignores it, calmly folding up his tarpaulin to stow away under the wooden platform, that makes his shop. Then he turns to the gigantic plastic bag on the platform and deftly undoes the knot that would take someone who hadn’t tied it, at least 5 minutes to prise free. The bag is full of bright plastic goodies that would thrill anyone under the age of 11. Motorcyle models, plastic animals, a mini Grand Prix complete with race cars, big yellow-haired dolls that close their eyes. He clucks in annoyance. He’s forgotten what today’s deal is. Annoyed, he pulls out the tarpaulin and shaking it open, spreads it out on the floor in front of the platform, in one move. Then he spends the next ten minutes arranging the toys on the sheet. Display complete, he winds up a miniature cyclist and set him zooming around in circles in front of the sheet. He’s ready for the day.

Class has already begun by the time the duo gets there. Sandhya is berating Dhiraj for his slowness.

“I was up all night working on this paper and now Nanda won’t let us into class! All because of you! I kept telling you, come fast, come fast!”

“We should have taken the earlier train. Kal se, I’m not going to wait for you. Understand?!”

Dhiraj opens his mouth to retort but shuts it. Not because it would be pointless to argue (he’s not old enough to know that) but because the professor is nodding them in, albeit with a glare. When the class leaves, two hours later, Sandhya picks up from where she left off.

“This is such an important presentation! And all the teams got formed already. If we had reached on time, I would have gotten a better one!”

“Is that so? Who else will put up with your screaming everyday?”

Sandhya’s eyes flash angrily but she’s too busy biting her nails. Anyhow, she knows Dhiraj is right. She would have picked him, even if she had gotten first choice. He’s the only one who will let her run the project the way she sees best. But that’s because he doesn’t like to do any work himself.

“As usual, it’s on me! What are we supposed to do now? Game changers in business, it seems. All the corporate bigwigs are gone.”

“That Facebook guy is Mark Zuckerberg. Vineeta and Rajni have already taken him. All the online entrepreneurs are gone. IT also. Even bloody manufacturing!”

Dhiraj pauses to check his hair in the noticeboard glass, then he says,

“The trouble is we have too many students in the class. This is the problem in this country. There aren’t enough people left to be our role models.”

And they make their way to the canteen for lunch.

It’s 5:25 when Sandhya enters the station, alone this time. After today, she is never going to wait for that idiot Dhiraj, she has decided. Project work can be done on email. Why should she waste her time while he goes to smoke with his lukkhad friends? Anyway she’s going to end up doing most of it herself.

There is a train waiting at the platform and the indicator shows four minutes to go. She smiles and runs towards it. Just as she sets foot in it though, she remembers something. Scowling, she checks the train pass in her wallet. It shows the previous day’s date under ‘expires on’. She has a few seconds to decide whether to risk losing the train or not. Ticketless twice in a day feels like too much for her. So with a murderous expression on her face, she trudges back to the counters. Only one is open and there’s a long queue in front of it.

Rashid is standing by a pillar nearby, enjoying his chai, before the evening rush begins. He notices her, a strange dawdling sight in the middle of a focus-obsessed mob. He smiles. Turning to the book shop vendor, he borrows a little paper booklet. Then he tears out a couple of coupons from it and walks over to Sandhya. She’s standing right next to the coupon punching machines. Rashid dumps the looseleaf coupons onto the machine and holding the booklet open, he stares up at the noticeboard that displays fares by station.

Sandhya assesses him. Jeans, shirt. He doesn’t look like a coupon booklet kind. More the second class pass variety. Before she can make up her mind though, he turns away suddenly. Sandhya hesitates, then follows him. He crosses the commuter traffic and stops in front of one of the shops that dot the corridor from station to the main road. She approaches him and asks if he will give her a few coupons from his booklet. Rashid stares and she suppresses a twinge of annoyance. It is not that unusual a request. She takes out her purse. He says, “Ek minute” and starts to dig into his pockets. As she waits she looks around. There’s a little cyclist man zooming around on a bicycle, round and round, on the floor. Behind him, a row of soft toys clap their paws, clashing little metal cymbals. Sandhya smiles.

Her reverie is interrupted by an insistent “Meydumm, meydumm!”. She looks up to see Rashid giving her a handful of coupons. They must be worth at least 30 rupees. She picks out two 5s and a 2, making her exact fare back and hands him a twenty-rupee note. He shakes his head. Sandhya is embarrassed but also mindful of the minute left on the indicator above her train.

“No change.” she says, ruefully.

He smiles and waves her on.

The next morning, Rashid arrives a little earlier than usual. There’s another line today plus he needs a little time for his new idea. He sets his two large plastic bags down carefully outside his shop and crosses over to the station ticket counter. He checks the signs posted above each window for their work hours, till he finds one that’s scheduled to go on break in the next five minutes. And he joins the short queue.

When he reaches the counter, the clerk in the window is stretching, wondering if he can leave a minute or so earlier. Rashid adopts a brisk tone and asks for five coupon booklets. To cement the deal, he holds out a five hundred rupee note with a few additional notes and coins – the exact fare. As Rashid has anticipated, the clerk doesn’t bat an eyelid but takes the money and dumps a bundle of coupon booklets in front of him. Then he puts a large board in front of the window and gets up.

When Sandhya passes by, an hour later, only one of the shops is fully ready, while the others are still opening up. She notices that it is manned by the same man who gave her the coupons the previous day. But the miniature cyclist is gone. Sold, perhaps. And instead of toys, she notices, he’s selling hairbands. Bright plastic half-moons.

She approaches and touches one of them. The shopkeeper doesn’t even acknowledge her presence. He probably doesn’t remember her, she thinks. But it was nice of him to give away those coupons – they wouldn’t be a small amount for him. He turns and takes down a hanger that has more elaborate hairbands and holds it up to her. She smiles, no thank you. Uncharacteristically, he doesn’t push further but puts it away. She follows his movements and notices that he also has a stack of cloth-covered folders. Each one comes with a bright neon clip.

Following her gaze, he picks up one but he doesn’t hold it out to her. Instead, he sits down and opens one on his lap. There are a few papers in it (which he has picked up uncrumpled from the floor and filed inside). He snaps the clip on and off. Then he shuts it and holds it up, the wrong way. Nothing falls out because of the clip. Sandhya is impressed. She looks at her watch. Class starts in twenty minutes.

At 6 in the evening, Rashid repeats his actions of the previous day. Seven people manage to make their train because of his coupons. He accepts payment from two of them. He can see they’re not regular passengers and are unlikely to come back soon.

The next day, he’s selling mobile phone covers and two of his ‘coupon people’ from the previous day, stop by his shop. Only one buys though. But Rashid is not disheartened. He sees Sandhya rush by clutching that red folder with its yellow clip, almost everyday. In a week’s time, it will be time to sell those clips again. Maybe this time, he’ll add them to notebooks.

Sandhya’s presentation on the Indian CEO of a Fortune 500 company begins as follows:

“A game changer is a person or idea that transforms the accepted rules, processes, strategies and management of business functions.”