Quoted In HT Cafe: ‘A Shot In The Dark: Why Artistes Love To Perform With The Lights Out’ 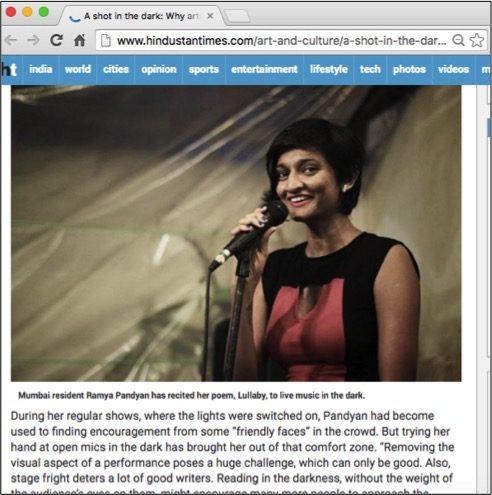 HT Cafe carried a story by Sapna Mathur on darkroom performances in Mumbai. I was quoted for my spoken word poetry. They were also nice enough to include a video of my collaboration with Karthik (performed in the light, so you can see) of the same act we did during the darkroom event – Lullaby.

The story is called ‘A shot in the dark: Why artistes love to perform with the lights out‘.

Conversations can crystallize your own impressions and Sapna’s questions made me think about my craft a lot more deeply. Here are the things I said –

“Ramya Pandyan, a Mumbai resident who has been attending open mics since 2009, says she started participating in blind poetry shows because they offered her anonymity. They also made her more aware of her craft. “The biggest distinction between the performing arts and other art forms is that there is no barrier between the artiste and the audience. With writing, you feel a certain safety behind the computer screen or notebook. But when you’re on stage, you are naked and vulnerable in front of the audience and their judgement. But a dark room levels this playing field,” she says, telling us that she’s even recited her poem, Lullaby, to live music in the dark. “Once you get used to the darkness, you feel a certain warmth and closeness with the people who are in that room with you. You can hear people breathing, shifting and fidgeting. We tend to listen to each other better — both the audience and the performers,” adds Pandyan.”

“During her regular shows, where the lights were switched on, Pandyan had become used to finding encouragement from some “friendly faces” in the crowd. But trying her hand at open mics in the dark has brought her out of that comfort zone. “Removing the visual aspect of a performance poses a huge challenge, which can only be good. Also, stage fright deters a lot of good writers. Reading in the darkness, without the weight of the audience’s eyes on them, might encourage many more people to approach the stage,” she says.”

“What is even more trying is when artistes want to collaborate on a performance in the dark. Pandyan worked with guitarist Karthik Rao on a blind poetry show, and it was “tricky” to carry through. “Any spoken word performance is a spontaneous art form. This means your words, speed, tone and the order can change with every rendition. In collaborations, you have to communicate with each other during the performance without letting the audience know. Thankfully, Karthik and I managed to read each other’s sounds during the performance and didn’t miss any beats,” she says. Bad experiences or good, this is an activity these performers are willing to experiment with. “We grew as artistes because of it,” says Pandyan.”

One thought on “Quoted In HT Cafe: ‘A Shot In The Dark: Why Artistes Love To Perform With The Lights Out’”