N is for A Nice Guy 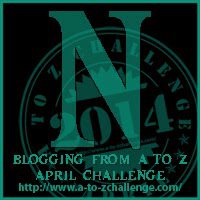 I was challenged to write noir fiction by a friend. Being that I’m utterly unfamiliar with the genre, all I had to go by was a sexy woman in red, a world-weary man, cynical lines and criminal intentions. I gave it a desi twist, imagining what the seamy side of my city would be like. Tell me if you enjoyed it. For today’s A to Z Challenge, I give you n for noir, N for a Nice Guy. By the way, if references to sex, crime, the underworld or prostitution bother you, please do not read further.

N is for A Nice Guy

You might expect to find people who look like her about at that hour. People who look like her, but not her. If you were feeling peckish and in a mood for a certain kind of company, you wouldn’t be too far off your mark, to approach her. You’d have to have money though. This one does not look like your classic 300 rupees, by the hour, mooh mein lene ka extra sort.

She walked into my room at quarter past two. A red chiffon saree, so transparent, if it had been yellow, it wouldn’t have been visible at all on the smooth contours of her skin. The palluv bordered with black lace drew a sharp line from the corner of her shoulder down to the tip of her right breast. And if that blouse hadn’t been black, it wouldn’t have been there at all. Her hips, undulating around an impossibly low waist tuck, entered my room before her breasts did – no mean feat considering her proportions. That’s how I knew what she did for a living.

My first thought though, was that she was a hi-fi type, stumbled into my place for nasha. But I didn’t bother telling her that was 3 doors down at Abdul’s room. We’re not friends but why give away information for free? I have a clean chit, with everyone. I may not look it but then, look at where I live. Tinsel town those mediawaalon used to call it in the 80s. Tinsel tarnishes in three days in this weather and scratches like fuck.

My name is Mihir Kulkarni and I am a real estate agent. The only 24 hour estate agent in the city that never sleeps. I still can’t believe how stupid they’ve all been to never catch the significance of that. People need spaces, different kinds of spaces, any hour of the day. A kholi for 4 nights, a bed for 3 hours, a shelter for a kid for 2 days, a safe place to keep 6 petis…I’m the man that will get you these, cash upfront, no questions asked.

I looked her straight in the eye, lace bordered, red tinged watermelons notwithstanding. It’s about being a professional and letting them feel they can trust you. Anyone could be a client, even a Zeenat Aman lookalike in a chiffon saree. Men looking at her in the face couldn’t have been something she was used to. To her credit, she didn’t look surprised.

“My boyfriend is trying to kill me. Help me? I was told you were the man to speak to.”

So, a place to stay. 3-4 nights maybe. Till she could raise the funds to buy a ticket back home. I could tell she didn’t have much cash (where would she store it?). But she was a wild card. I couldn’t put her with Sheena and Maria – those girls were sweet but they’d probably run off to sell this madam’s high heels. Naveen had told me that they were to be off cocaine for at least a month while the cops were cracking down.

So I took her home.

She didn’t bat an eyelid when I opened the door to the Worli bungalow. But her eyebrows registered surprise when she saw my passport photographs lying on the dining table.

“This is your house?”

I opened the refrigerator and took out the daal palak I had made earlier. By the time I’d brought over a plate of rotis and sabzi to her, she was seated at the dining table. The palluv I noticed had been pulled over her other shoulder (not that it changed things much).

She talked as she ate, clipped words between small bites. Jabalpur was home. Parents who wanted to see her married, a 45-year-old widower who wanted to marry her, no dowry, same old story. Except she didn’t run away with a lover. She got a job with a local news channel. Two months later, they put together the money to come to Bombay, where the real masala was.

Sting, she said, wiping up the last of the daal palak with a roti. That’s what Sateesh had said would be the best way. Sateesh who had been her senior in school but had made it to Pune 7 years earlier and was now Bombay bound. This time though, he wanted her to go with him. Future ban jaayegi, he had said. Blackmail money or instant publicity – both investments in a future of media glory. They set their sights high, right in the beginning. No slow build-ups in this game. The name she told me, surprised even me.

Not a Khan, not a Kapoor but one of Bollywood’s reigning superstars. In addition to a wife and two kids, he also carried the distinction of Family Man. He’d burst on the scene with his first blockbuster 10 years earlier – a kesari-sweet film with 17 songs and lots of wedding rituals. He’d followed it up with a string of similar movies and was credited with bringing back family audiences into the theatres, hence the title.

But Sateesh thought he must have a dirty secret somewhere. So he fitted her with the instructions and the hidden cameras. She was nervous she said, but it all went well.

I said, leaning forward in spite of myself.

“We…yes. But I didn’t go back to Sateesh. I showed HIM the cameras. Family Man. He was angry at first, but he realized I was helping him. So he promised to get me out of the dirt. What life is there for the girl in a sting video? Sateesh was not going to hang around after he sold it.”

Ah, so that was that. I stood up and went in through the door to prepare a bed for her. I knew I should get back to work but I didn’t want to leave her alone. Her eyes were still downcast.

“I thought…you know, he really is a nice guy. What did I know? There are no nice guys in this industry. Now he’s trying to kill me.”

She stood up and the palluv slid off her shoulders, the hem pulling the tuck off her waist and the saree fell in little circles around her ankles. I was about to turn away when she turned around. Reaching around with painted nails, she edged the blouse strap off. And there, along the line of the slinky strap, was a deep gash, still raw with exposed flesh. When she turned around, I saw the bruises streaked across her breasts.

“There’s more. On my thighs. And in other places you can’t see even in this dress.”

That was when I noticed the line around her throat, lean like the imprint of a single slender finger. I had missed it earlier, probably mistaking it for a fold in the flesh. I reached out and ran a finger across her cheek, wiping away her tears.

“You are safe here.”

It was around 6 in the morning when I lay back and pulled out a cigarette. She turned on her side and looked up at me.

“You know, you really are a nice guy. You didn’t look like it but you are.”

I finished my cigarette before I turned to look at her. Then I stood up and pulled on my pants.

She widened her eyes. The cheek of it. It didn’t work any more on me. I had almost felt sorry for her. Almost, for a fraction of a second, I’m not too proud to admit it. Till she showed her true colours. Begging, begging me to gag her, to bind her up and hurt her.

I had it all on record. And the camera never even saw my face. Stung the sting. No Bollywood roles for a woman who had done this. S&M is new enough to India to have its takers but not for open consumption.

“It won’t even work as a leaked MMS. This is HD quality and no phone camera can give you that. Don’t try claiming that it was someone else, either. People saw you entering this place. And there’s those scars you had when you came in. I made sure those weren’t make-up.”

My phone was ringing. It would be my money. My first cash-after-delivery job but it was big bucks. The name of the caller flashed ‘SATEESH’.

“Even you tried to take advantage of me.”

“Everyone has to pay their dues, sweetheart. That’s what you did to that poor actor, didn’t you? He hasn’t had a movie in a year.”

“I thought you were different.”

I picked up my phone and strode to the door. Then I paused and looked back at her.

“There are no nice guys in this industry.”

*Image (without text) via adamr on FreeDigitalPhotos.net

One thought on “N is for A Nice Guy”