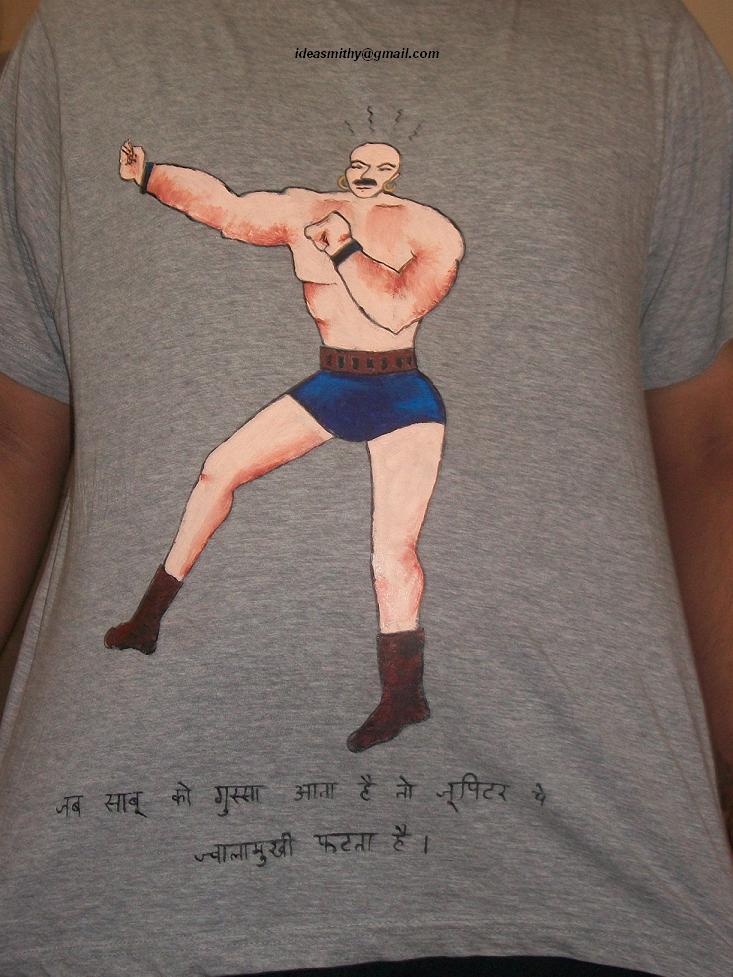 Another edition of Ideart! It is most delightful to be able to gift something that you’ve put a little piece of yourself into. The boy is at the slightly flummoxed receiving end of this.

Being a typical boy in all such manner of things, he’s a comics aficionado. Grave conversations have been had about the merits of desi superheroes over the firang crusaders. He’s actually a Homer Simpson fan but the American sensation’s face is plastered over teeshirts right across town. I thought it would be fun to bring in a desi touch to the comic characters-on-teeshirts fad. So I started with something familiar to every Indian kid across the country (secretly in cases like mine since my parents didn’t approve of the bad English). The world of Diamond Comics!

Chacha Chaudhary would have been the obvious choice for the tee-shirt with the telling caption of ‘Chacha Chaudhary’s brain works faster than a computer!’ But I felt the concept of a bald, alien giant clad in gold earrings, belted shorts and boots had far more potential.

I looked through a number of images online and offline to get a good sense of Sabu. The drawings were actually a lot more detailed than I remembered them. For example, Sabu’s boots aren’t always the ubiquitous black. Sometimes they match the colour of his shorts, sometimes the belt. The mustache is finely waxed and shaped (presumably garden shears would have been put to use trimming it). And finally his body language lent itself to a delightful range of renditions. Since Sabu is the muscle end of Chacha Chaudhary’s adventures, there are several panels that depict high kicks or punches (with a star-shaped ‘Pow’ bubble).

I put together some amalgamation of all of these. The result shows Sabu preparing to land either a punch or a kick. I know a villian being punched might have added to the image but I wanted a dedication to Sabu, not just a scene from the series. As it turns out, I think Sabu could be mistaken for a (rather clumsy) ballroom dancer.

White and black were my choices for the background. But when I saw this grey, I fell in love with it. Sabu has neither the pristine moral science character of Chacha Chaudhary nor the dark, brooding past of some of the other superheroes. He’s musclepower, sidekick and comic relief all in one. Chacha Chaudhary has to restrain him from some of of his more angry ideas on occasion. He’s treated like a child, a rookie and even a faithful pet. Grey seemed the perfect choice for Sabu.

Given my low confidence with drawing male characters, I took a long time sketching the figure out. The simplicity of Diamond Comics artwork made this a good first step for me. I retained the slight errors in size and perspective because that’s what I see in the actual comics too.

Colouring was the easiest bit of this project, given that Sabu wears very few clothes. A skin tone for the body,  blue shorts, gold earrings and brown belt and boots. The effect was rather like a child’s colouring book so I added some shading. The way to do this is when the base layer of paint is still slighty wet but not runny. Lay a spot or even a thin line of a darker (in the case of the skin) or lighter (the shorts) shade of the same colour and blend in.

I’m rather happy with the way the shading turned out on the arms, especially Sabu’s left arm. The brush strokes left hairfine lines and I didn’t blend them in further because they give the impression of hairiness and add to the desi machismo look.

Sabu’s expression didn’t give away much and I didn’t want the Jupiter giant to be mistaken for a dance instructor. So squiggly lines radiating from his head were added to let the viewer know that Sabu was angry!

And my favorite part of the image – the caption, was detailed below. In Hindi for maximum impact:

(When Sabu gets angry, a volcano erupts in Jupiter)

Other comic book art in Doga: Born In Blood & The Making Of A Superhero: Nagraj

Aug 2, 2021 IdeaSmith
Healing IdeART My Soulmate Is A Book