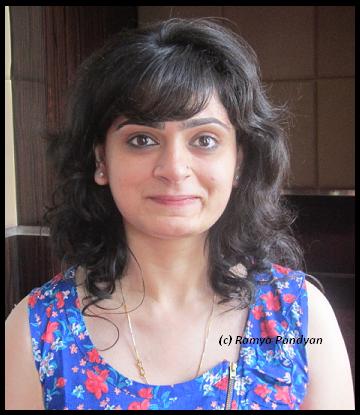 There’s much that’s great about Mad Men – the story, the characters, the “Oh my God, it’s Lucky Strikes!” kind of references that have adpeople drooling. And then of course there are the clothes. Spanning the swirly skirts of the sixties to bellbottoms & miniskirts of the seventies (my favorite decade!), Mad Men is a visual delight. I’ve been lusting after the perfect polka-dotted full sleeved blouse for over a year now but haven’t found one as yet. None of the stores and few of my friends seem to get the reference.

So I was delighted to spot this lovely young lady at a blogger event last month. Radhika Sarin is a student and that day, she was tagging along with her sister, a style blogger. Seated further down the row, I didn’t notice it immediately. But when I saw her across the room at lunch, there was a distinct Betty Draper feel about her. Though having talked to her, I think she might be more Peggy Olsen (in attitude, not dressing). Now, before I get too Mad Men geeky on you, here’s the look:

Something about her face reminds me of Peggy Olsen, in the later seasons when she’s found herself a career and some confidence. But the dressing is very much the earlier seasons, more the Little Woman thing. And the print too – in her later, liberated avatar, I think Peggy prefers solids & geometrics to floral prints.

The length of the dress is a later decade too but again, I’m probably nitpicking. I love short dresses that flare out at the waist and end a little above the knee. They do wonders for the curvaceous Indian woman’s figure.

Getting off the Mad Men reference and back to Radhika’s look. The dress was a nice stiff material that held its shape and didn’t go over all floppy. It actually had a little ruffle running across the top and a zipper to match.

And on her feet were these: