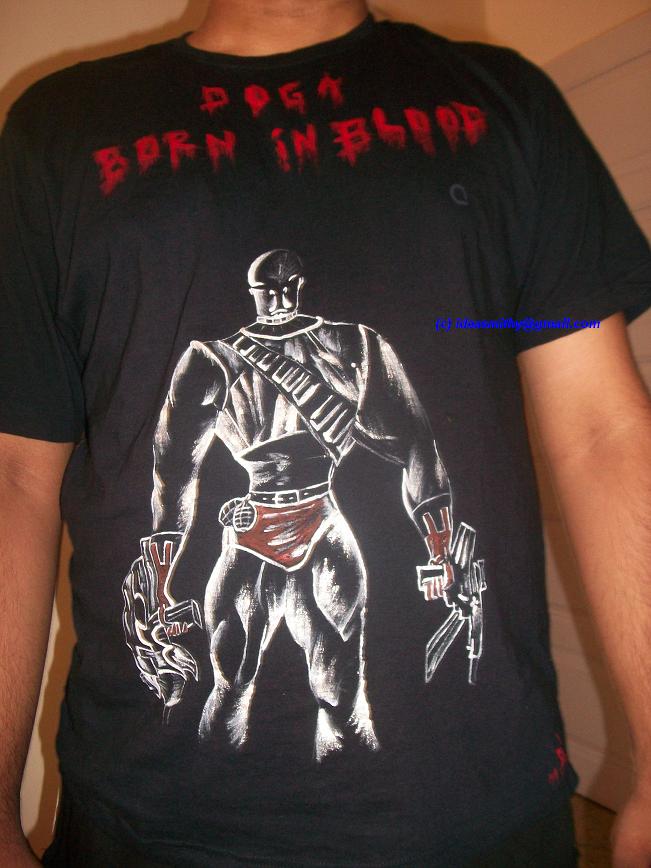 This is another of those posts I’ve been meaning to get around to for a good while. I painted this for the boy right after the success of Sabu. While the Diamond comics thespian provoked a soft chuckle, this piece got more of the reaction I was looking for – not from the boy himself, but his equally comic-book loving friends.

Doga is his favorite childhood comic character. I’d never heard of him so far, which is probably why the boy’s description of “he’s called Doga because he was brought up by dogs” made me go ahahahahhahaha! He was mighty miffed by that so I painted it for him as a peace gesture.

The painting is based on a high-resolution image that he sent me, in colour. However, I figured a plain white line drawing against a black background would make maximum impact. But once I painted the character, it felt natural to add a few strokes and before I knew it, the picture had a shaded feel to it which I think added to the diabolical nature of the character. The boy thinks that the head is the wrong size and the limbs proportion is off. I take that feedback since I’m not too comfortable drawing masculine features and profiles. Mostly, I’m just happy it doesn’t look too ridiculous. Incidentally, I did the lines in plain white and the shading in a silver tone. The pearl tones catch the light adding an additional eerieness to the image.

The extra colour on the pants and the gloves was added as an afterthought after I looked at the original coloured picture again. I’m not sure whether this was a good idea or not since it might bring it closer to the original but possibly takes away from the impact of pure silver-white on black.

The boy also requested the caption ‘Doga – Born in blood’ written in bloody, dangerous-looking script. It took me awhile to find something like that online but once I started painting, it was actually really easy. It was just a matter of dabbing the paintbrush in water, after coating it with paint and letting it drip down the tee-shirt a bit. Once it dried, I touched up the natural ooze patterns with regular colour. If I had had a pearl toned red pigment available, I’d have highlighted the words too. As it turned out, I think the effect of dried blood (not shining but semi-clotted) comes through better.