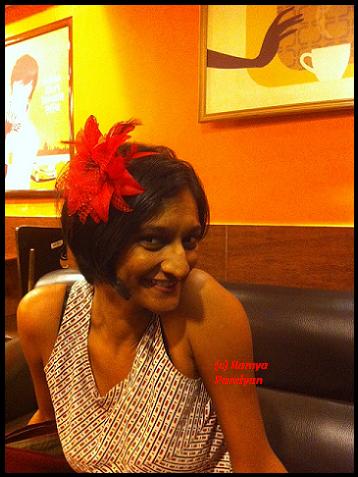 I spotted a trinket seller on the train selling something interesting, something I realized could be the answer to what I’ve been style-lusting for, over a year over – a fascinator.

This is a big red confection of lace and cloth attached to a slim red headband. Isn’t it beeyootiful?? I still think so.

It’s been getting some pretty odd reactions. I wore it to a post-dinner coffee I had with Annkur the same night. He wouldn’t stop staring at it and talking to it instead of to me so I finally let him take this picture and took it off and put it on the table.

I wore it to work a couple of days later and people are still making jokes about it. In defiance (or call it pride), this picture is now my Twitter DP. I still think it looks gorgeous, no matter how many jokes I have to endure. After all, people said the same thing a decade ago when I started wearing scarves around my neck. Now that the hospitality industry has co-opted the trend, no one would think twice about it (and of course that means I’ve had to give it up!). So, once the world has caught up and everyone is wearing fascinators, remember you saw it here first.

Anyhoo, I had a chance to bring it out the very next week. It was Durga Puja after all and religious or not, I’m not going to let a chance to dress up and celebrate womenpower get away, am I? It was a stifling hot evening though and I knew I’d have to stand for a long time. Usha Uthup was performing and she’s worth enduring a suffocating October evening, mosquitoes and all, for. Here’s what I wore.

were a man, I would marry it. It’s white, it’s cotton, it’s got self-embroidery, it’s FabIndia and it fits me in an age-and-style-appropriate manner – what more could I ask for? Trusty blue denims to go with, of course.

And the bag is a conductor-satchel from Esbeda, which brand I’d really given up on since they went all aunty-bling. This piece though caught my eye and made me walk in. It has a criss-cross pattern across the front, three compartments and is the exact size of an iPad which means it’s big enough for my stuff without being too big. Purrrrrrrfect!

And here’s my Lady Red look! After all, you don’t need to wallow in a colour (or an attitude) to wear it with style. And you don’t need a crown to call yourself a queen; sometimes even a flower will do.