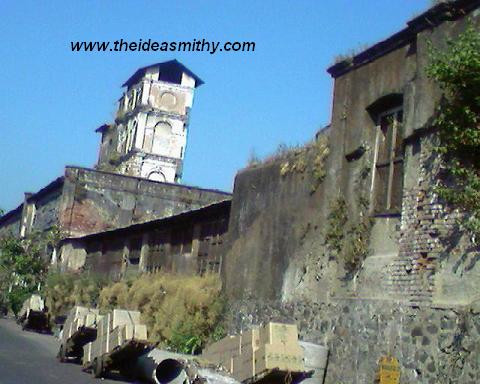 Friday* evening is when the city comes alive with a vengeance. As if it were sleeping the rest of the time. But Fridays are a frenzy of partying and drinking and laughing too loud. In a frantic attempt to drown out the panic of life running out faster than we can make sense of it.

One such Friday, I stayed in late at work. Of course the work never ends. I suppose I could have left earlier. Met a friend for coffee. Or another for drinks. Or walked down the seaface. Or photographed flamingoes in flight. Or watched Aamir Khan’s debut performance as a director. Instead I took a walk.

Behind my office is an old building that used to be a factory. Now one half of it has been converted into a glossy glass-and-steel office complex. The other half is used as a parking lot. On a late Friday evening, there weren’t too many cars around. I strolled around in the semi-darkness. Not even a breeze…unusually warm, even for a Mumbai December.

In between the buildings is a long stretch of concrete road. No vehicles at that hour. No employees walking out of the building. Just the stars above on an unusually clear night, visible between asbestos sheets on one side and curved steel girders on the other.

I stepped into one of the open doorways. I wondered if this is what it felt to walk around in an old castle.

Heavy cylindrical pipes overhead, solid pillars and rusted metal staircases at the corners. Hundreds of busy feet must have walked this floor thousands of times over the years. Machines being oiled, a worker showing another one how to pull a lever, a foreman looking at a sheaf of papers, sparks in another corner. Things were made here, lives were built here, dreams were dreamt and realised…or shattered here. Hundreds and thousands of them. Don’t they say ‘put your heart into your work’? Those milling masses must have put their very souls into their work. I still feel them.

Mumbai was built on industry, on factories, on the hard labour of workers. They made this the city of dreams, the commercial capital of the country. The grit and hard-headedness that is taught to us as a way of life now were the lessons that they handed down from lives of unrelenting labour. They were my true ancestors. I haven’t forgotten.

Incidently this post was written almost a year ago. The building in the photograph does not look that way anymore, since it has been converted into yet another gleaming office complex. The mills shut down long ago and now with their buildings being revamped, it feels like the tombs of Mumbai’s ancestry are being razed away.

* From a Friday long, long ago.