DNA Feature: ‘From Business Consultancy To Performance Poetry, This Woman Manages It All’ 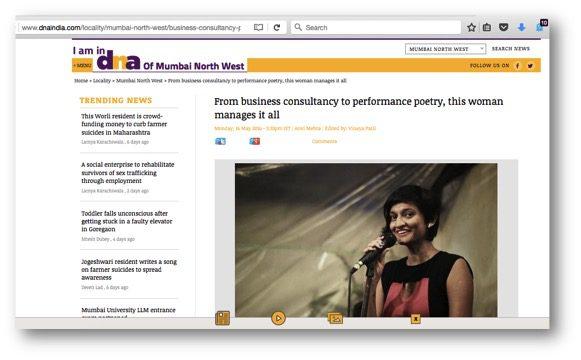 Earlier this week, DNA‘s Anvi Mehta ran a story on my performances as a Spoken Word artist. Heh, I’m deeply flattered. The story is titled ‘From business consultancy to performance poetry, this woman manages it all‘

Here is what Anvi wrote (quoted from her article):

Andheri-based Ramya Pandyan, quit her corporate business consultant job in 2009 to take a sabbatical. A regular blogger since 2004, Pandyan was introduced to open mics and poetry recitals during this break.

She is now known for performance poetry and spoken word.

“I visited an open mic event where I saw many writers read out their poems and perform them. As I used to write poems since my childhood, I thought of doing the same and very soon I started attending open mics at The Prithvi Café, The Hive and other such places and became a member of Caferatti events,” Pandyan explains.

As an ardent blogger, poet and performer she was in touch with other writers, poets and artists. The various groups for creative writers and performers influenced her to start a community of her own in 2013.

“This community is called Alphabet Sambar and we meet weekly to share our writing work. The members help each other grow by reviewing their writing works. We also have a series of activities like writing challenges, workshops and boot camps. As we support the worldwide annual novel writing challenge (Nanowrimo), where participants finish a novel in a month, last year we had conducted a novel writing boot camp,” she adds.

It was because of this writer’s community that Pandyan met a few performance poets and was introduced to spoken word. “A few members did performance poetry and spoken word. It interested me and now for a year and a half or so, I am following these styles to read out my poetries. I use music, expressions and actions when performing. Like for a poem called ‘Paper Plane’, which is not a typical rhyme, the piece goes further as I actually make a paper plane for the audiences,” she narrates.

Juggling with her consultancy, training and some freelance writing alongside her regular poetry performances, Pandyan also maintains her blog as well as a YouTube channel of her performances.

She performs every Monday at Tuning Fork, Khar, Tuesday at The Hive, Bandra and fourth Mondays at Prithvi Café on a regular basis.

One thought on “DNA Feature: ‘From Business Consultancy To Performance Poetry, This Woman Manages It All’”