D is for Dread 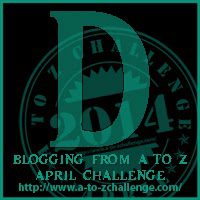 I’m rather late with today’s, having been struck down by a hot day and Andheri in general. But the delightful Jai Ranjit pushed me to explore my creative limits and how can I resist a challenge? He gave me ‘D is for Dread‘ and challenged me to write a story that had a positive ending. Here’s today’s #AtoZChallenge. (and have you read A, B and C as yet?)

D is for Dread

We took our casualties. We took the hits, like men. Sticks and stones, there were some broken bones. But that John, he cries like a girl anyway. Some guys can’t handle Grade IV fire. We’ve left him behind.

There’s brief respite. We’re home with our families. The summer is beautiful. But we all know what’s waiting at the end of it. These past four years have been playground fights, in comparison.

It must be done. The women speak of it with almost demented cheerfulness. But at night, when I’m sitting on the steps, watching my mother shell peas, I hear her sniff and say, “He’s not ready yet.” I’m tempted to run out and hug her. But I hold back and trudge back to bed. The time for tears is past.

It went by so fast. Yesterday Monica walked to the end of the road with me. We didn’t say much. It was everything that we were walking together. When we reached my door, she said, “See you.” I nodded, unsmiling and turned away. We both know she won’t. By next summer, she’ll have forgotten me. In fact, this Saturday, I know she’s seeing another guy. He lives next door to Allen. Allen, my best buddy, he gave it to me straight. Or maybe he was just happy to see her go. Allen never liked her. Allen doesn’t like girls, never has.

But he’s a good friend to have in all times. Especially in times like the one we’re going to be having. We don’t yet know what their militia have in their arsenal. Everyone in my section knows I’m the bravest of them all. But I’ll be glad to have good ol’ Allen at my side, flanking me, especially when the bus drives up tomorrow to pick us up.

I lay out my uniform on the bed. It’s crisp and new. The unfamiliar colours, that I’ve only ever seen on the older lads are now mine to touch and wear, every single day. I hang them up carefully, turn off the light and try to sleep. I’m going to need my wits about me.