All play and no work…. 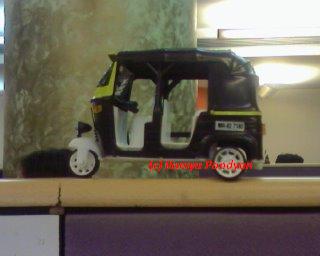 The last workshop we attended was on ‘Stress management’. And on the neatly bulletted suggestions for relieving stress was the following idea…”Have your desk look clean and beautiful. Keep a stuffed toy or photograph on your table.”

Every couple of days there is a tournament with both parties good-naturedly fighting and discussing the vehicle’s dynamics the way only boys can do. Frequent betting (and losing!) is ensuring that SNC loses hair even faster than he should.

SNC and SFOS also have an annoying habit of playing catch with stuff they find on my table. The yellow smiley faced ‘stress ball’ that used to adorn the rim of my coffee mug has vanished and I just know these two guilty smirkers had something to do with it.

Well last week, the auto-rickshaw went missing. SFOS nearly tore his hair out screaming at SNC for not putting it back after the last tourney. A frantic search yielded the truant 3-wheeler, fallen between tables. Well…I know someone’s Achilles heel now!
—————————————————————————————-

There is a pack of cards given to each new employee who joins my company. No…not visiting cards, these are playing cards (King, Queen, Jack type…) emblazoned with the company logo. Why? Who knows…probably some HR initiative to show what a ‘fun’ environment we work in.

One particular card from my neighbor’s pack has been lying on the joint table for over a month now. Today I found the card lying temptingly close on the LOC. Why tempting? Because, of all the cards to have lying around, this is the Joker.

I pounced on it and painstakingly printed SNC’s name and added a word on the card. Now it reads “SNC…Professional Joker”. I was thinking of pinning it to his board. Unfortunately I found my thumb-tacks missing….grrrrrr, SNC!!! While rummaging about, SNC picked up the card and boomed…”That’s my card!!!!!!!” I said, “Yeah I know…just making sure everyone knows it.” To which he growled..”You can’t just pick up things and write on them!” Wait till Monday.

Then he looks around and says…”Whose pic will look good with a mustache?” Spotting my plastic menagerie, “Who’ll look good without ears, without a nose?”. Shifting that evil gaze to my beanie toys (of the Hunchback of Notre-Dame and Frankenstein) he smiles vilely and pronounces “Guess who has only one tooth left? And who’s going to lose the nut in his head?”

Yeaaarrrrgggghhh….we’re all bloody possessive about our toys. I’m locking up all my stuff away.