Why Men Need To Get Quiet 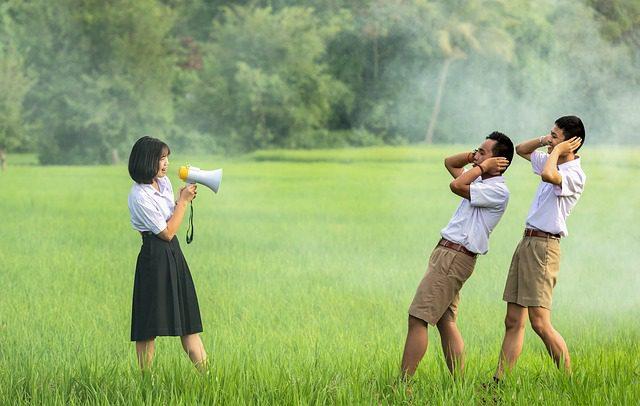 Yes, that’s what I said. Yes, all men. Yes, as an entire gender.

Notice how much male-generated noise there is in the world? In politics, in art, in the media, in popular culture, in coffeeshops and bars and drawing rooms and boardrooms and bedrooms. There are more men in the world and they are saying much more. Ergo, they generate more verbal clutter. This is not a gendering accusation. It’s simple statistics.

I ran a small experiment. I looked up the term ‘Silence’ on Pixabay. All the images of people that came up on the first page were of women doing the finger-to-lips gesture. Others were of serene landscapes and peaceful places. Even some animals. But no men. Silence is not an attribute to be associated with men.

On the other hand, when I tried looking up ‘Speak’ on the same site, I found images of frogs, monkeys and men. This was the first picture that had a woman in it. Notice the number of men and their body language in it.

The dating scene, the art beat, the corporate world — these are all rife with men making verbal jumps without caution. Mansplaining, manspreading, constant needless aggression — just what makes an entire gender keep at this, despite all evidence of it only being damaging behaviour? I think it’s because men are constantly being pushed to be the opposite of quiet. The trick is to keep talking, they seem to be told. Let the verbal diarrhoea run, regardless of sense, propriety, reason or consideration. Keep speaking because if you don’t, you will will cease to exist. Doesn’t that explain why trolls and meninists bash on with statements that mean nothing at all? Or why men uniformly descend to aggression, even threats, when they reach a verbal stop? Because when they run out of words, they think their existence is running out unless they keep well, running. Even if they run all over the other person.

Consider this. Women are constantly being pushed to quietness. Silencing by bullying, by harassment, by ridicule, by social convention. Speak softly, speak of small things, speak little or better yet, not at all. In fact, quietness is prized as a virtue in a woman. Do not be a speaker, a thinker, an individual. Be a puzzle, a prize, an object.

If female, be seen, not heard.

By stark contrast, men are NEVER told to be quiet. If a man is quiet, it must be in a hyper-glorified character like Silent Brooder. Or Cryptic Wise Man. Or Damaged (subtext: sexy) Bad Boy. If he cannot pull these off, he can always plead shyness (“Aww, that’s sweet”) or social anxiety (“Here, let me take care of you”). Like being male and being quiet are not simultaneously possible or healthy and efforts must be made to change this situation immediately. His very silence must be turned into a story that screams loud enough to catch the world’s attention.

If male, be HEARD, even if you don’t have anything to say.

That’s a tall order for a gender that science believes is not as good at communication or social skills. Silence may be a female prison but maybe it is also a female prerogative. Some of us rage on about allowing women a voice. The other side of it is to get men to shut up and to let them shut up. We need to teach our men that their existence is not built of words only and that their value goes beyond what comes out of their mouths.