What’s In A Name? – Naming Policies On Social Media 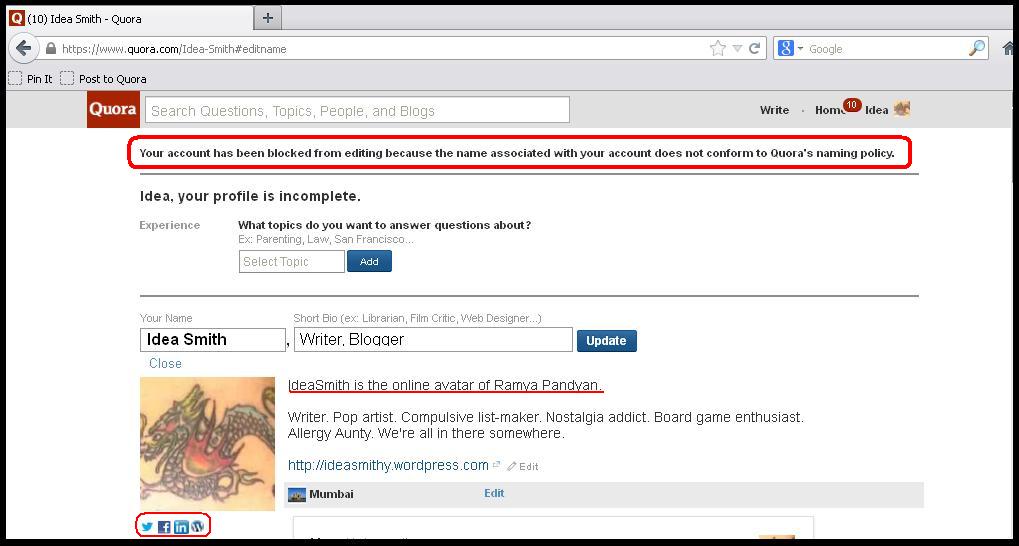 When Google Plus launched in 2011, I jumped in enthusiastically to try it out. I was already on Facebook, running two pages as well, an avid Twitter user but I was interested in a new offering in the space. Shortly after, Google refused to let me continue using the service unless I let them know my ‘real name’.

Let me explain. ‘IdeaSmith’ is a name I gave myself in 2004, when I first set up a blog. After all, the Internet was still a new if not entirely unfamiliar place. As one of the early Indians on the internet, I had played with handles without knowing the term in the 90s, on chat and later on EGroups-YahooGroups and an email address from which I used to send out articles to friends and family (my first self-publishing & broadcasting experiment). By 2004, the notion that you could be whoever you wanted to be on the internet had already gotten commonplace. I chose IdeaSmith as a step up over ‘Wordsmith’ because I saw (and still see) myself as a person of thoughts and ideas, not limited to just words but multiple media & formats. Also, I liked the gender neutrality of it.

For reasons of privacy, I decided to keep the identities of IdeaSmith and Ramya Pandyan, distinct. This allowed me to explore my writing and my ideas, unfettered by all the restrictions imposed on me as a woman, as an Indian, as a member of my family and all other communities I had been a part of. In time, I realized that this construct had outlived its purpose. I was now a more confident writer and person. A lot of people have tried to embarrass me for those years of anonymity, treating it as something silly or shameful that I had to ‘hide away’. I don’t see it that way. To me, it’s like conducting your experiments in the contained environment of a laboratory before making your work visible. What’s shameful about that?

Since 2007, a lot of people who interact with the IdeaSmith identity have known my ‘real name’ and other details about me. In 2009, I officially came out revealing my name. Now my real-w0rld name appears in most places online too. However, IdeaSmith is now a brand that is associated with a specific kind of writing, type of views and a set of content. As a writer/content creator it both symbolizes and carries in it, my work of the past 8 years. Given that this is the online space, people who are looking for my work are more likely to look for Ideasmith than Ramya Pandyan.

Thus far this has been a consideration but not a problem. My LinkedIn profile states that I have been employed by certain companies (nothing to do with my work as IdeaSmith) whose records carry the name ‘Ramya Pandyan’ and hence that is the name I go by there. In all other places, the records are associated with IdeaSmith or Idea Smith (where a first and last name requirement exist).

If you look at my profile, you will notice it starts with the sentence,

“IdeaSmith is the online avatar of Ramya Pandyan.”

The profile also links to my presence on other social platforms, including LinkedIn.

I’ve been asking people what they think about this in the last week. Aside from the scoffing that comes from people who always thought having a handle was a stupid idea, there is one coherent thought that did come my way – security. As the social/digital space continues to grow in its presence in our lives, I can see why platforms and networks are feeling the need to know their users better.

Quora however, does allow people to post anonymously. I could have done that, were my purpose one of mischief or something else equally dubious. What’s more, ‘Smith’ is a perfectly acceptable last name. ‘Idea’ as a first name may be unconventional but it does not strike me as an entirely unacceptable notion. And finally, isn’t it rather presumptuous to decide what kind of name is or is not acceptable? Also, what kind of security is offered to the service by knowing a name? I could come up with a seemingly plausible but false name like say Margaret Reed. How would that protect their service in any way, were my intentions to turn malicious?

I’ve been very interested in Quora thus far but with this, they fail to fulfill one of my key requirements. I am on Quora because I am interested in social content and digital communities. It benefits me to explore this area and work the tools under the name of IdeaSmith, otherwise these are just meaningless time-draining actions. As long as a social media service does not let me do this, they’re closed and unavailable to me. Isn’t that exactly what defines a need-gap?

Here are some other people I’ve seen experimenting with online identities as distinct from their offline ones:

Each of these people have had different journeys and presumably, different objectives for their online avatars. Doesn’t that indicate that there are any number of reasons that a person would want to have a name different from their offline one? It seems to me that an online service would be unwise to force its users to conform to their offline names only, thus depriving them of one of the greatest benefits that the internet has to offer – the opportunity to go beyond the offline.

May 21, 2022 IdeaSmith
Intimacy & Relating Life in Digitalia Navigating the Feels

3 thoughts on “What’s In A Name? – Naming Policies On Social Media”