Trust Is A Trapeze Without A Safety Net 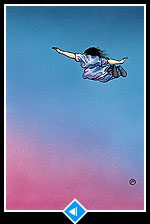 A friend asked me yesterday how I would feel if my boyfriend took off on a trip with my best friend. I thought for a bit and said,

I trust my best friend implicitly so I think I’d feel a lot safer if my boyfriend went with her rather than with some other woman.

The question however opens up a plethora of other questions. How much should one trust one’s partner? How far to go before one meanders into naivete? How much to hold back before transgressing into paranoia?

Some years back I was seeing a guy who used to travel often on work, to Bangkok. On one of those trips, I received the following message from him:

I’m sitting in a café and being served by a pretty waitress in a very short dress. She’s been giving me the once over more than once. What should I do?

Commitment isn’t a piece of paper or spoken words. It is a state of mind. Do what you please.

I didn’t ask what he finally did and he didn’t tell me. A few weeks later, he cheated on me with someone who called herself my friend. It was a soul-tearing experience. Other than the obvious low self-esteem and the humiliation, I was plagued by doubts about my own trusting nature. Should I have controlled the reins a little more? Should I have been more watchful of him? Should I have trusted him less? This was not the only time my trust had been laid waste after all.

And yet, despite all of the above, after all the crying is over, I find myself coming right back to the same thought. If I’m in a relationship with someone, I have to, I absolutely must respect that person as a responsible adult, as someone with a mind and conscience of their own and trust that they will do the right thing, by themselves and by me.

Every occasion of thwarted trust seems to imply that this is foolishness, rose-tinted naivete at best. And yet, I know I couldn’t stand to be with someone who didn’t treat me the same way; someone who didn’t want to face their insecurities but thrust them on me in the form of control games, instead.

The point is not that insecurity and feelings of jealousy don’t exist. Indeed it would be unnatural to think they don’t. I think if you care for someone, you fear losing them, you worry about losing face, you are scared of being hurt. But these fears are our own, our individual responsibility to deal with and it’s criminal to dump them on the object of one’s affections.

As an afterthought, I added to my answer,

I think I would feel quite bad about the fact that my boyfriend was going off with another woman (even my best friend) but I probably wouldn’t say anything about it. I mean, if he didn’t understand that, then what was the point of telling him? It would be my problem to handle but I wouldn’t feel guilty about feeling that way. After all, wouldn’t he feel the same way if I had done the same thing?

At the end of it, all I can see is that trust is a tricky thing, a lottery ticket. You take a chance, stake your emotions and hope that they will be reciprocated, respected and cherished. If they aren’t, that’s just too bad but it’s the price of looking for a relationship. If you decide to fall in love, don’t expect a safety net, that’s all. You may fall, you may survive, it’s up to you to decide whether it’s worth the risk.

4 thoughts on “Trust Is A Trapeze Without A Safety Net”