Skip to content
Laws of Attraction Men, men, men The Dating Game Times, they are a-changing

The Trouble With A Woman Asking A Man Out Is… 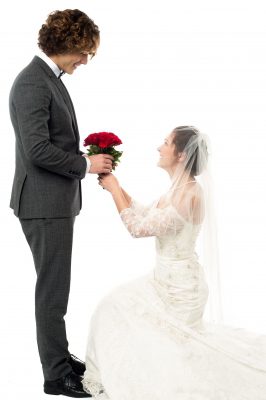 I’ve done this. Asked a guy out. Expressed my interest in him. Proposed a relationship. Been the one to initiate. I’ve done it several times over, in various iterations, with different men, over the years. I wrote about this a few years ago. But looking through one of my old diaries made me realize that I’ve done this before as well, without consciously thinking of it as something different from what other people did.

I’ll be the first to vouch for the tremendous self-confidence this gives a woman. I asked a friend of mine whether she had ever initiated a romantic contact. She pursed her lips and said,

“I consider it beneath my dignity to ask the man out.”

I wasn’t offended. If anything, I wanted to laugh and tell her what she was missing. She didn’t quite understand when I told her that on the contrary, it was a tremendous ego boost, a huge chunk of empowerment a woman gives herself when she decides to initiate. If any of you feel the way she does, here’s why I feel that way. I never have to sit around waiting for a man to notice me. I am not trapped in an endless loop of self-doubt on how I look and behave in order to attract him. I am not compelled to play down my interest or my intelligence or my achievements. And most of all, I don’t have to play the passive role of audience. I get to be the performer, the prime driver, the leader and this is a role I love.

My logic so far has been that if a man finds my initiative unappealing, he’s definitely not right for me in any way. This way, he knows what’s on offer right at the start and there will be no ‘But I thought you were…’s afterwards. No regrets, no lies, no manipulation. In theory.

Here’s what I find actually happens. Men rarely, if ever, say no.  I have only really had one no, which came from a friend when I told him how I felt about him. He shrugged and said, “Well, I don’t feel that way about you.” And that was that. Disappointing but not difficult to handle.

Being asked out by a woman happens infrequently and to very few guys. This has two fallouts. One, a lot of them don’t realise that they have the option of saying no. The injunction to ‘treat women right’ often gets interpreted as being polite, accommodating and shielding women from the truth. Notice the number of men who admit that they are helpless if a woman seems displeased or worse still – cries. The message they carry is that they cannot, absolutely must not say ‘No’ to a woman. This rule of course, can only be sustainable when the women follow the rules of not asking for much. Asking a guy out breaks that rule so what is to be done when the counter-responsive party insists on following the old rule? What a gargantuan problem this becomes, when you consider that you might end up going out with, in a relationship with, possibly even married to a man who has been too polite to say no to you! I know I for one, would rather take the disappointment and humiliation of rejection than live in that farce.

The second problem is choices. Imagine you’ve had only 10 ice-creams in your entire life and somebody holds out a strawberry cone to you. Even if your favorite flavour is chocoate, even if you’re allergic to strawberries, aren’t you likely to accept it anyway? That kind of childlike greed is exactly what I see and fear in men today. In this case and also a more recent one, the men weren’t necessarily ‘bad’ people. But I think the temptation to accept what was on offer – receiving attention from the opposite sex, unsolicited, is a major ego massage, after all – was too much to resist. One guy went out with me even though he was already with somebody else. The other went along because he wasn’t sure about how the person he actually liked, felt. Both were degrading and humiliating experiences for me. In both cases, the men have been sorry that things turned out that way.

‘Because that is how it has always been done’ didn’t deter me from breaking the first rule that the man always takes the initiative. But I’m hitting a roadblock when it comes to this. You can’t tell if a guy is going to be too polite too thrilled with the novelty of it, to say no. I know women are going to have to learn to deal with the ‘No’ in a mature and dignified manner. I also realize that men are only going to start learning to say no when there are enough such instances happening to and around them. Who wants to be part of the first wave that braves the learning curve, then?