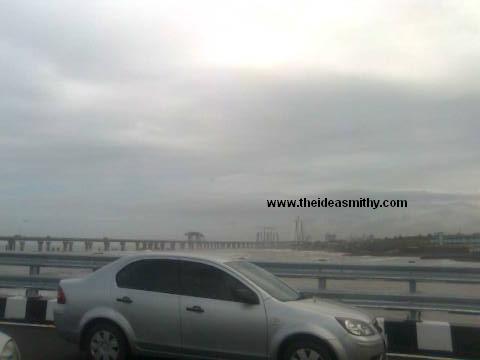 The much awaited Bandra-Worli sealink opened yesterday. In the unlikely case that you don’t know what I’m talking about (in which case, what are you doing reading this post?), this is a bridge built across one of the bays between the islands that comprise Mumbai. It connects Bandra reclamation to Worli seaface and has been predicted as the solution to easing up the daily traffic snarls from the western suburbs to town.

The sealink has been a long time in the making, having faced some setbacks and delays as well. It has been a part of the grand plan for Mumbai for so long that it has almost made a mark in local lingo by now (Yeah, I’ll get a promotion by the time that damn sealink gets made, maybe then I’ll be able to afford a car too!).

Most Mumbaikers have seen its grow, inch by agonizing inch on the horizon, from each direction. Just last year, I looked out at the impressive seaview from the window of a friend whose Mahim flat faces the then under-construction sealink and said,

Whatever is taking them that long??!! There’s just another inch to go!

After much fanfare, the sealink was inaugurated by Sonia Gandhi last morning and thrown open to the general public at 7 a.m. There will be a Rs.50 toll to traverse the sealink but that becomes functional only as of next Monday. So for the next few days, you can expect most Mumbaikers to derive full paisa vasool rides, riding Mumbai’s first ever sealink.

Quite fortunately (for me) I had an appointment in town that same morning. Fortunate I say because I (like many suburbanites) detest the painful commute into town, even less by road. What a stroke of luck to have a reason to go into town on the very day the sealink was inaugurated!

So I nagged dad into turning off into Bandra reclamation, shushing his incessant doomsday prophesies that the sealink would only add to commute time and what was so great about that damn bridge anyway, it’s taken long enough to come up and blocked Mumbai’s strained resources as it is.

In a few minutes, I was ready to jump out of the car and dive for cover as we ran smack-dab into the middle of the kind of traffic that makes road-rage seem like a pardonable offense, not punishable by law. I think every Western suburbanite must have been on that road to Worli today, whether or not they wanted to go to town!!!

I actually saw a few cars take U-turns and head back out, presumably to get to their destinations, the old-fashioned Mumbai way.

But as we inched forward and the high beams of the sealink came into view, my spirits surged and even my father ceased his complaining and grudgingly took out his own phone to take a picture.

We passed an impressive-looking toll-naka. Oh okay, I know there’s nothing impressive about a toll-naka, I’ve seen the one at Mankhurd and what about that huge one leading out to Mumbai-Pune expressway that I passed, not three days ago?

It still was a momentous occasion, for we were on the brink of breaking new ground. As we passed, I’m rather afraid to say that the insofar well-laned traffic just sort of melded into itself and became one sea of cars going helter-skelter. The road curves a bit before it touches the sealink and the lanes just sort of get lost in each other. The authorities are just going to have to do something about that if they don’t want to face choke-ups every morning just before the Bandra end of the sealink.

Very near the sea, I saw a flock of crows flying around frantically and wondered aloud,

Why are there so many birds around? What are they so agitated about?

Dad said that perhaps there was an colony of nests in that place which had so far been pretty secluded and undisturbed. Displacement was a sobering thought to start the trip on, but well needs must.

Once we actually got closer and closer to the sealink, I could feel the anticipation electric in the air. Cars slowing down, audible gasps, people zooming their camera lenses and phones, excitement was rife.

I can’t even begin to describe what the journey was like. I am sure, in a short few days I’ll become as accustomed to it as the regular train and road commute. But today, this first trip was special. It was the realization of the great Mumbai dream. We were riding over water. All my hitherto unvoiced fears that the bridge would give way were blown away in the cool breeze. The bridge is rock-solid (not at all like Lakshman Jhula, ma, you can stop worrying, it won’t sway in the wind) and it would otherwise feel just like riding on a concrete road, except there’s the sea on both sides.

What an odd feeling to turn to one’s left and see Mumbai, the city, the familiar buildings and roads on the horizon but on the wrong side and from so far away!

I saw a media van pass in the opposite direction on the clear Worli-to-Bandra lane, with a journalist standing out of one of the windows holding a mike, and a cameraman standing out of the opposite side shooting her. It was a funny sight and I’m only sorry I didn’t have a chance to shoot it.

The image below shows the proud and cheering workers who were lined up to watch the first few travellers on the sealink. What a moment of glory it would have been for them!

The couple in the Qualis next to mine were carrying balloons and traversed the entire length of the sealink with their balloons held aloft and flying out of the windows. Viva, the spirit of Mumbai!

We touched terra firma again at the Worli seaface end. I’m rather afraid this means the end of those long, wonderful soujourns ending in masala milk and sandwich. With the incoming and outbound traffic to the sealink, the seaface is bound to become thoroughfare and lose the charm it has.

We’re losing a few lovely spots and the traffic problem may not really be solved. But the experience of riding over the sea is something every Mumbaiker should have. This link has been far too long in coming. In the larger picture, perhaps easier access will level out some of the differences of Mumbai’s very own caste system?

I can’t tell just yet. My head is still spinning with the adrenalin rush of yesterday morning. I really feel like I’ve been part of a grand day in Mumbai’s history, almost like the fall of the Berlin wall. It is a big thing for this city and as a Mumbaiker, I feel really proud.

9 thoughts on “The Bandra-Worli Sealink Opening”