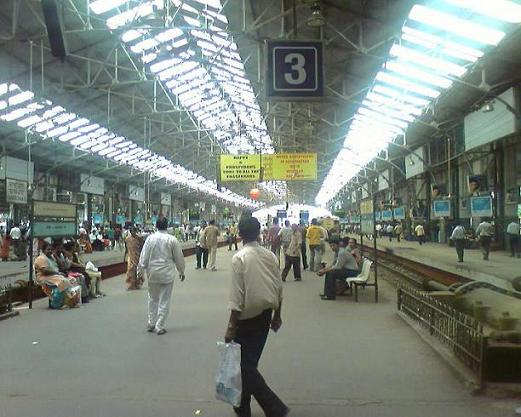 I sometimes hear people describe Mumbai as a place where people treat each other equally and that this city doesn’t face the societal seggregation that Chennai and even Delhi have. I disagree. This city has its own version of a caste system. It is subtle and isn’t immediately apparent, especially to people who haven’t lived here for very long. Bear with me while I alternate between ‘thoroughbred Mumbaiker’ parochialism and an objective viewpoint, as I explain.

The city is tangibly marked length-wise by the three major train lines…and believe me, these divides are practically political boundaries! Besides the metropolitan railway network’s tangible lines…much more subtly, the city is divided into town and the suburbs. The grand North-South divide that splits the country seems to be micro-imposed onto our seven islands. There are the suburbs and there’s town (not of course counting those ‘in-between’ places like Dadar). I’d say never the twain shall meet except for the omnipresent railway network that holds the city together and makes it possible for the gypsies like us to shuttle between the two disparate worlds every day.

I didn’t notice the distinction as much when I was a kid. Obviously, my circuit was restricted to the ‘burbs (Only the townies say that by the way!) after all. In the later years, as my world expanded to college (also in the suburbs but peppered with frequent trips into town and increased association with the townies) then work, I began seeing how people seggregate themselves and others. It is human I suppose to have to put people into boxes and live by a ‘your box-my box’ mentality.

I watched a few movies with a friend…a lot in the suburbs and one in town. He took great delight in pointing out that the town theatre was quieter and that ‘people knew how to behave and watch movies like civilized human beings’. Yes, the suburban cinema halls are noisier. Easier on the wallet as well. As for being more civilised, well, I’ll reserve my comments on that one for the time being, save to highlight the fact that ‘town’ is aspirational heaven for a certain section of Mumbai’s upwardly mobile.

The suburbs, begin with Bandra (at least in my mind) on the Western line and the equivalent counterparts on the other lines. Bandra is attractive of course with its by-lanes and busy main roads, shops, theatres and the seafront of course. On the other hand, I’m starting to think Bandra has pretensions to being the new ‘town’ to the suburbs. Don’t get me wrong…I love the area but the Bandra-ites seem caught someplace between being the genteel townies and the down-to-earth suburbanites.

The townies of course dress a certain way, talk a certain way, are a certain way. I really can’t stop myself from hurling a volley here when I say that if I lived in a place that was as well-nourished by the authorities that be, I’d be genteel too. Instead I trudge the length (and breadth) of the city daily. I satiate the ego of the greater powers that want a “fancy South Mumbai address” while also staying within the budgetary restrictions that make the suburban reality home.

And really….what is with ‘the real Mumbai’ and ‘those suburbs’. Yes, I’ve heard all about the logic of Greater Mumbai and how everything else is just an off-shoot. But well, that’s the point, isn’t it? The growth is happening North-ward. Office complexes, shopping malls, educational institutions and most importantly…housing…all of the action is happening in the suburbs. True, it’s more like a mad melee than planned development but well, whose fault is that?

Where do we hear of train lines breaking down? Which are the overhead bridges that fall? Where do residential buildings collapse? What part of Mumbai gets paralysed in the monsoons, during bandhs and festivals? Alternately when ‘the city breaks down’, where is the collapse actually happening?

True, it is negligence, corruption and plenty of lawlessness that has caused some of these disasters. Considering that most Mumbaikers live in the suburbs, isn’t it then the area that deserves greater attention than South Mumbai? And yet, sudden disasters like flooding, unexpected traffic snarls are all left to get worse while images of ‘life returning to normal’ hit us from the media….all conveniently shot at Marine Drive or Worli of course. It is definitely a fact that the suburbs while not getting the same pampering attention from the authorities are growing faster…well anything is faster than no growth, isn’t it?

Take a minute to look at the picture in this post. That’s Churchgate station, the starting point of the Western line. How many townies recognize that at a glance? Well, most ‘burbies do. But then again, it’s the suburban-ites that primarily use the train lines, isn’t it? This picture, in my mind, represents Mumbai’s very own caste system. This is the magic entrance, the metaphorical line of control with its gate opening up to the hallowed ‘town’….and a few hours later sucking up the teeming majority of the populace back into the vast infinite of the suburbs.

The caste system exists, no doubting. Each section fighting for its share of space. It just seem strange that the divide is so unequal in terms of numbers and facilities available. Then again, that’s life. Life in Mumbai anyway.

10 thoughts on “The Mumbai caste system”