S is for Someone Else 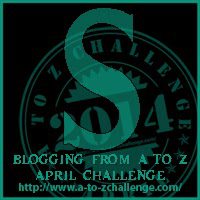 I’m rather happy with the idea I had today. But I’m not sure if it came across in the story. I am trying a different tack from the stories I started this month with, though. Give me your comments, please? This is S is for Someone Else for today’s A to Z Challenge.

S is for Someone Else

She was sitting on a steel bench on the pavement, eating a sandwich. I sat down next to her, the striped chill of the bench lacing the comfort it gave to my tired legs, with tingles.

she asked, not turning to look at me. I rubbed my hands together and held them to my face.

It had been so long since I heard another voice articulating it, that it woke me up a bit. It even warmed me. But I couldn’t bring myself to accept it.

“When you’ve looked as long as I have, you start to recognize others. Make no mistake, it is a hunt. Or are you still calling it a quest?”

I didn’t call it anything actually. I just stood up one day and started walking. There was nothing left to hold me. And as I walked, it seemed like there was only one direction to go in. Only one thing to seek out.

She stood up and paused, as if we were together. The sandwich lay discarded on the bench next to me. She lifted her chin slightly, her eyes studying the streetlights.

“Bring it along. You can eat as we walk.”

I stood up and began following her. But I left the sandwich behind. It seemed appropriate. As I came up next to her, she cut her gaze from the streetlights and looked at my hands, in surprise. Then she shrugged, a dissatisfied curve cutting diagonally across her face, from narrowed eye to downturned lip.

“Someone Else can have it.”

And that was only the beginning. She continued talking, salting the air with her breath, for the next 7 hours. Wyoming she complained about the state of the kebabs. In Guangzhou, it was reminiscing about Jack the Ripper. At Bodrum, she told me stories about the Byzantine empire. And in Indore, she wanted a Chinese digestive that she had been told was the thing to extend a lifetime by 20 years.

She took two days to get to it. Easter she said, always made her sentimental. I think it was actually caroling that made her crazy. I knew her well enough to read her puzzles by now. And it was snowing in the streets with the air heavy with Silent Night. So typical, I thought. A failed singer losing it at the sound of music. The sour taste of boredom mingled well with the emptiness in my stomach. She fit. But she was still walking.

It wasn’t till four days later that we entered a deserted street. A single house stood at the end of it. The sign on the door said ‘Someone Else’. No Mr. or Ms. Nothing to indicate marital status, gender.

She stopped the minute she spotted it. But I didn’t. This is what I was here for. I continued walking. Then I stopped and came back for her. This is also what I was here for, for her. She could search the world over and lead me to the place we both wanted to go. But she would never enter it herself. Bringing us here was her task; taking us in was mine.

But she stood rock still.

I opened my mouth and breathed a loud puff. It wasn’t loud enough but the air came out and lay suspended for a few seconds. With effort I untangled vocal cords I hadn’t used in three years.

She looked at me, squinting. Then her lips moved again and her legs with them. As we walked, she spat out,

“You have such a squeaky voice. It’s disgusting for a man your size.”

I nodded in acknowledgement. We entered the house, hand in hand.

Inside we found ourselves standing on a single plank. That was it. There was no room to go any further. String and car parts and wigs stuck out from the mass. She put out her hand before I could stopped her and started jabbing at it. A history textbook fell out and lay open to a page that had her name on it. But she paid it no heed.

So I followed her lead and began poking into the mess as well. It wasn’t till later that I noticed the heavy, fetid smell in the air. Almost immediately, she stopped and looked back at me.

“I don’t want to do this anymore.”

I nodded and we walked out.

“After all this searching, I thought…I thought…Someone Else would have at least been enjoying the fruits of what she stole from me. But this…this is…the nerve of it!”

But it was said with no power, no righteous rage.

“Do you want to go back in and take it back? It’s all there, you know. Everything you ever wanted, that went away to Someone Else.”

“Your wife must be in there too. Do you want to?”

I smiled. She was such a good travelling companion.

she informed me gravely,

“All our lives spent chasing things that we don’t want anymore. And where is Someone Else, anyway?”

“He…She…just left us another gift.”

She didn’t bother looking at me as she picked up speed. In Johannesburg, I caught up with her.

“Did you expect anything else? He is the God of Disappointment, after all. He delivered, full service. You got your round trip around the world. Here’s your deposit.”

Then I handed her the half-eaten sandwich I’d been carrying and I walked away.

*Image (without text) via artur84 on FreeDigitalPhotos.net