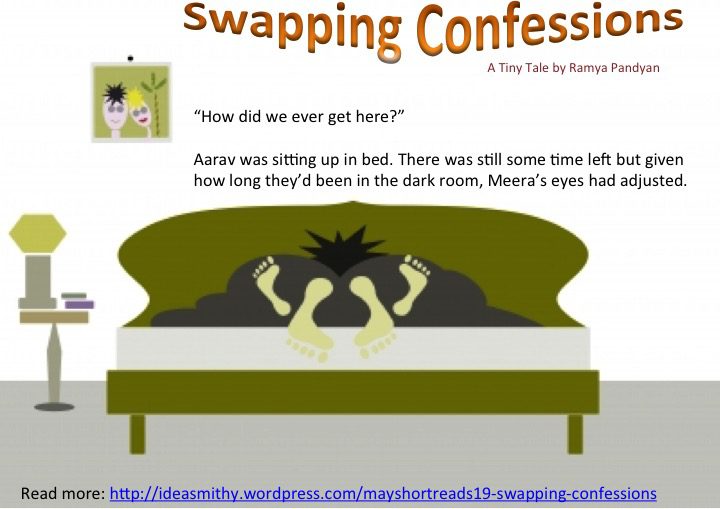 *Image via africa on FreeDigitalPhotos

“How did we ever get here?”

Aarav was sitting up in bed. There was still some time left but given how long they’d been in the dark room, Meera’s eyes had adjusted.

But Aarav wouldn’t turn. His back arched as he hugged his knees. Meera knew it was a ploy to get her to touch him. Well, she jolly well wouldn’t. Enough with all the rule-breaking. She shifted on the sheet and reached across to the remote control to turn the air-conditioning up. Aarav stretched back onto his pillow, next to her.

“I hate cupcakes. Nothing but dressed-up mawa cakes with fancy names. Everybody acts like they didn’t grow up on Mongini’s fare but were born to kitchens that dished out these pretentious dishes everyday.”

Aarav smiled. He knew Meera worked for a high-profile desserts chain. Cheering up, he said,

“Hobby photography is a con, you know? So many DSLRs being bought and carried around but most of them don’t know how to frame a shot. When they show off their latest shots, I want to slash them across with a red pen the way my third standard teacher used to do.”

Meera turned, her hand reaching for his. She found it under the sheets.

“Do you want me to turn the airconditioning off?”

Meera stiffened. He was paying her back for not embracing him earlier.

she replied, hissing out the last word. She knew his real name very well. He knew hers too. But when he put his arm around her, she snuggled into him.

“Sometimes I mark emails I’ve already checked, as unread, so I can pretend that there’s a lot of activity in my mailbox.”

In her right ear, she could hear his voice booming through his chest, even before it reached her other ear, open to the air. Like hearing a secret from within. Super secret.

“When my mother died, I slipped into the kitchen to chop an onion so my eyes would be watery.”

He stirred under her and she sensed his discomfort with the weight of her and her secrets.

“It’s fine. Maybe the other way for awhile?”

As they shifted positions, the sheet slipped. Little beads of sweat had formed between Meera’s breasts and the cold air rolled over them, making them tingle. But Aarav’s hand came up, smoothing the sheet in place and holding it down with his fingers. He left his hand there and the stroking resumed. They didn’t go longer than ten minutes, however.

Still, Meera felt relieved. If they hadn’t, at least once, she’d be hard-pressed to explain why she wanted to have an evening out with the Joshis again. Rishabh, her husband, might worry that she wasn’t enjoying herself. He seemed comfortable enough with the arrangement and Meera didn’t want to disturb his equation with Mrs.‘Katrina’ Ace.

She turned to Aarav, wondering if he wanted to go again. As her hand snaked down to his stomach, he grunted a No.

He didn’t sound ashamed or apologetic and Meera allowed herself a frisson of pride at his nonchalance in her presence.

“I know. That’s why Rish…Rahul likes this.”

She could hear Aarav chuckle softly at her near slip, but she didn’t turn. It barely mattered.

“Yeah, RishRahul and Katrina work it out very well.”

Meera wanted to snap at him for speaking about both their spouses, not a definitive rule but definitely clanking the chains. But somehow she couldn’t summon up the energy. So she turned on her side and snuggled the pillow. On the side table, was a notepad with the hotel’s logo and next to it, a pencil with a broken point.

“Yesterday, I sharpened a pencil and emptied the powder into my boss’s coffee mug when he wasn’t looking.”

“His mother keeps badgering me for recipes so I give her ones I don’t use much with a few measurements changed.”

“Sometimes I pour Eno onto the bathroom floor and watch it fizzle. But even that doesn’t leave behind white traces on the floor like Dermicool she likes to paint the walls with, during a bath.”

Dermicool, huh, Meera found herself thinking and smirking. How utterly Borivili, even if Katrina did put on Bandra airs.

“I still love my husband, you know.”

“Has it really gotten better because of this?”

Meera held her breath, wondering if he’d throw the rulebook back at her. This was a serious breach. He took a long time to respond.

said Meera, turning back to him.

And they did have another round before it was time to leave.

The next month, the Joshis and the Chaudhrys decided to take a trip to Goa together.

One thought on “MayShortReads19. Swapping Confessions”