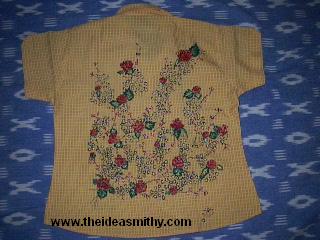 This is part of my series on fabric painting (after Peacock and Kathakali). But this was actually painted much earlier than those two.

I had this terrycot shirt checked orange and white. The overall effect was a sort of mustard. It’s not a colour I’ve ever been fond of or one that flatters me. Painting it was a rather delayed decision since it doesn’t occur to one intuitively to paint over something that already has a pattern on it. But I realized that the pattern was neither overwhelming nor highly visible. And it would serve perfectly well as a background.

I used several pictures of roses to figure out the basic geometric shapes and swirl-patterns that I’d need to use. It turned out to be surprisingly easy. I started with a round wavy shape (like little kids drawings of flowers) using black paint (Fevicryl no.02 Black). Then I added more waves and curlicues inside it. After that it’s just a matter of colouring and adding leaves.

The painting was actually loads of fun, the messy, splashy way. I made blobs of the basic red paint (Fevicryl no.39 Carmine) on the fabric. Then before it was dry, I daubed on the shimmery pink (Fevicryl no.303 Pearl Pin). The pink was probably an older bottle so it had gone a little creamier while the red, newer was liquidey. The net effect was that the pink stood on its own but blurred into the red at the edges to give a lovely shaded effect. I waited for these to dry before outlining and highlighting in black again.

The leaves were done using a similar principle – outlined in black, filled in with basic green (Fevicryl no.06 Dark Green) and daubed with the shimmery green (Fevicryl no.357 Pearl Metallic Green). And finally redefined with black once that was dry.

The details came in later. I added hairfine strokes of black to show the stems. Tiny buds with triangle-shaped leaves in blue (Fevicryl no.32 Cerulean Blue); these were done with  a thin brush dipped in colour and then pressed flat down on the cloth. These were given yellow (Fevicryl no.302 Pearl Lemon Yellow) centers. The leaf veins were lined with bronze (Fevicryl no.355 Pearl Metallic Bronze).

I started intending to only paint the back since it had an unbroken visage (the front has buttons all the way down so it’s difficult to do one contiuous painting). Then it looked so good that I added some detail in the front to match the theme.

The front detailing is not uniform copy of the back. While the back is just one pattern of roses scattered all over, the front shows a rose-trellis creeping up on one side and small bouquet-like collection of flowers on the other side that look like they’ve been plucked off the plant and dropped on the ground.

On the same side, I added a tiny rosebud and leaf detail on the collar.

One thought on “Ideart: Rose Garden”