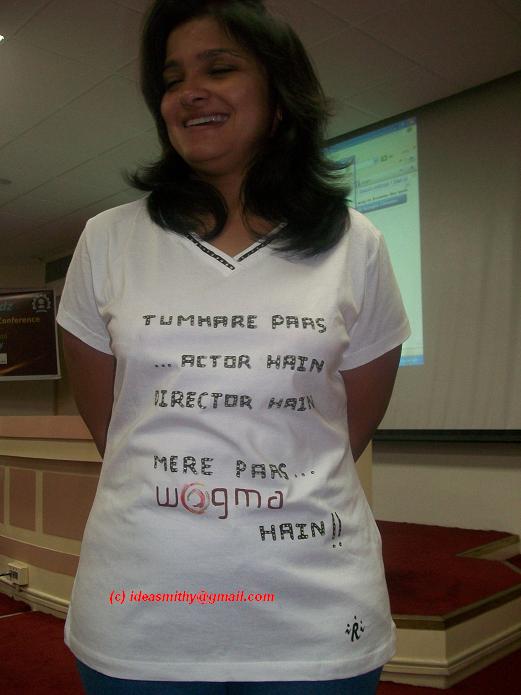 Another Ideart opportunity and my marketing mind tells me this should be called co-branding. 🙂 At the Mood Indigo-BlogCamp Dec 2010 that happened over the weekend, I had a chance to showcase one of my works.

I first met Meetu at a common friend’s party. A few months later, we connected at the 2008 BlogCamp at IIT Powai. We kept in touch, our blogs establishing a mutual admiration society. Last year, I called to tell her I’d be in Pune and she invited me to crash at her place. I don’t know if she has had a chance to regret that (!) gesture as yet but her place feels like my home away from home to me now. I have also had the honour of being a guest author at WOGMA, the blog that makes Meetu famous.

So it was nice to have the opportunity to show my solidarity for WOGMA and Meetu in a very personalized way, the Ideart way! Meetu wanted a fun WOGMA tee-shirt to wear to the BlogCamp event. She also sent me the inscription and a detailed description of the design. I think she was quite happy with the result. 🙂

(a filmi tribute to Deewar)

I considered two fonts for the message. Since Deewar came out in the 70s (my favorite decade of pop-culture!), I first wanted the curly-wurly psychedelic font that characterised those references (think the title of Om Shanti Om). But the message was too long to fit such a complex font onto the tee-shirt and I didn’t want to risk taking away from the WOGMA logo.

So I picked the other font which was what I think of as a ‘Las Vegas’ font, since Hollywood movies often show casinos and clubs with their billboards flashing names and surrounded by bulbs around each letter.

As with many Ideart projects, the conceptualisation took up the bulk of the time. Once I knew what I was going to do, actually carrying it out took very little time. The main words were painted on with a flat brush and touched up with the hairfine point. Once dry, I applied tiny yellow spots on top of the black letters. You can’t actually see the yellow dots too well and the effect isn’t quite what I had imagined with the Las Vegas lights. But it does brighten up the otherwise severe black strokes without detracting from the colourful WOGMA logo.

I was quite nervous about the WOGMA logo since this was the only thing that Meetu really wanted replicated as closely as possible. The logo on the site is an online print and I was not sure I’d be able to reproduce it in fabric paint. So I took some liberties with the shades and tried to stay close to the shape of the coffee-stain style ‘O’. I used my favorite technique of dabbing water-diluted colours and blending them where they met, before they dried. The ‘W’, ‘G’, ‘M’ and ‘A’ were done in a slightly narrower flat brush using a maroon colour (I didn’t have the plum shade of the actual logo, sorry Meetu!).

The back of the tee-shirt was even easier since I just replicated the WOGMA logo and practically scribbled the ‘movie reviews from a part of the audience’ that Meetu had asked for.

There was still something missing and it looked too much like the kind of tee-shirts that corporate types give out at conventions. So I gave it a neckline to make it look less like a tee-shirt and more like a dressy top. The same yellow-dotted black stripe ran around the V of the neck in the front. I didn’t have a chance to do the back and I figured Meetu’s long hair would cover that anyway. The entire exercise took all of one hour but a lot of frantic phone calls to Meetu. 🙂

Aug 2, 2021 IdeaSmith
Healing IdeART My Soulmate Is A Book