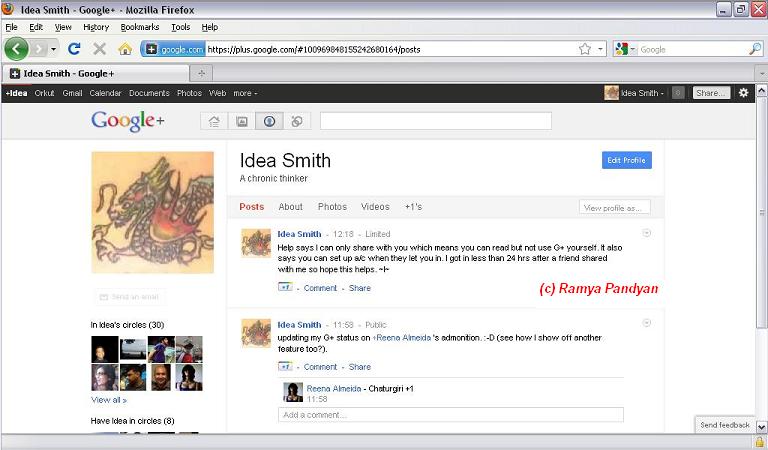 The day before yesterday, the boy mentioned Google’s latest product. Yesterday, the newspaper carried an article and I tweeted asking if anyone knew when it would be launched. Among the replies (that it already had been), I did get one incredulous one saying,

“I can’t believe you just tweeted that!!”

Yes,we tweeters are a snooty bunch, not unlike American High School movies. Shortly after, a friend ‘shared’ his post with me, which gave me a link to get into the network but not use it. This morning, I found I was suddenly in and able to create circles and ‘share’ myself. So I now have the latest snob-value accessory of the online-techy crowd – a Google Plus account.

I’ve spent the last hour exploring its features and occasionally tweeting about it. The fundamental premise that Google Plus is being marketed on, is the ability to share updates (and other things) selectively with only certain parts of your network (called Circles). Now Facebook allows for many of the same features but their privacy settings are rather clunky. What’s more, the past year has seen a few Facebook breaches and lapses which probably makes this feature of Google Plus, a definite, well, plus.

On the other hand, I’m wondering whether in the rush to get into the social networking race with Facebook, whether Google Plus really will sustain or just fall by the wayside (anybody remember Buzz?). For starters, there’s no other particularly interesting feature over Facebook. There is an easy way to integrate Twitter and Flickr but again, these can be done on Facebook with apps. Even the look and feel of Google Plus is very like Facebook (minus the ads). There’s a Stream which is like the Live Feed. Settings and Notifications are in pulldown menus in the top right-corner of the screen (a minor change over Facebook which has Notifications in the mid-left corner). Profile is laid out in much the same manner with photograph on the top left, main news in the middle body and friends details in the middle-to-bottom left.

One of the first things I noticed was that I could view the people in other people’s networks. Now that’s a Facebook feature I used to use to get around people who had set their privacy settings to not be visible on a general search. If you want to connect with someone, chances are you already know someone they know, even if those people are not connected to you. Somebody in that circle is bound to be open to searches. Get to their profile, look down their network and find the person you’re looking for. Facebook tweaked this awhile ago with an option to hide your friends list (though I think now you don’t anymore have the option to stay hidden from searches). Google Plus doesn’t give you the same benefit so of course, if you want to get snoopy and find out who is ‘in’ with who, look at their network. It’s a good thing though, that you can’t actually see who got put in what Circle or even what the Circles are called. So if you want to put your ex-es in one or even your most hated bosses, guess what? They won’t be able to tell they’ve been clubbed together! 🙂

You can update your status in a very similar fashion to Facebook (on the Stream or the Profile) but you can instantly choose who you want to share it with. You can also tag people by adding a ‘@’ which will then give you a dropdown of names to choose from (a lesser-known but very nice feature of Facebook). And finally, people can comment or +1 (similar to Like) your comment.

The Android app that was released at the same time as the launch is here. The window opens to the following:

The photograph feature is pretty good since the first picture I took and posted to my network showed up within seconds on my computer screen. Within the Stream, I clicked a tick icon. It turned out to be a GPS location tracker. What was really freaky was even though I clicked ‘No’ to enable GPS, it actually gave me a list of options based on addresses close to where I was at that moment! This is the one place I feel Google’s ‘Big Brother is watching you’ syndrome coming on since now, in addition to my email and network details, they also know my location.

It still is early days (or should that be early hours?) for Google Plus. I think the real shift will come if they can provide better add-on features via apps. A lot of Facebook apps are created by third-parties and presumably they’ll get on the Google Plus bandwagon too. What will be interesting is if Google Plus manages to make the app integration easier for the developer as well as the user. Also, I’d like to see them leverage the Android platform to create a good mobilephone-network interface as well as phone versions of the apps. I’ve been a Facebook loyalist but as the owner of Marvin, I’m certainly rooting for the latter.