Always Make Room For The Flowers 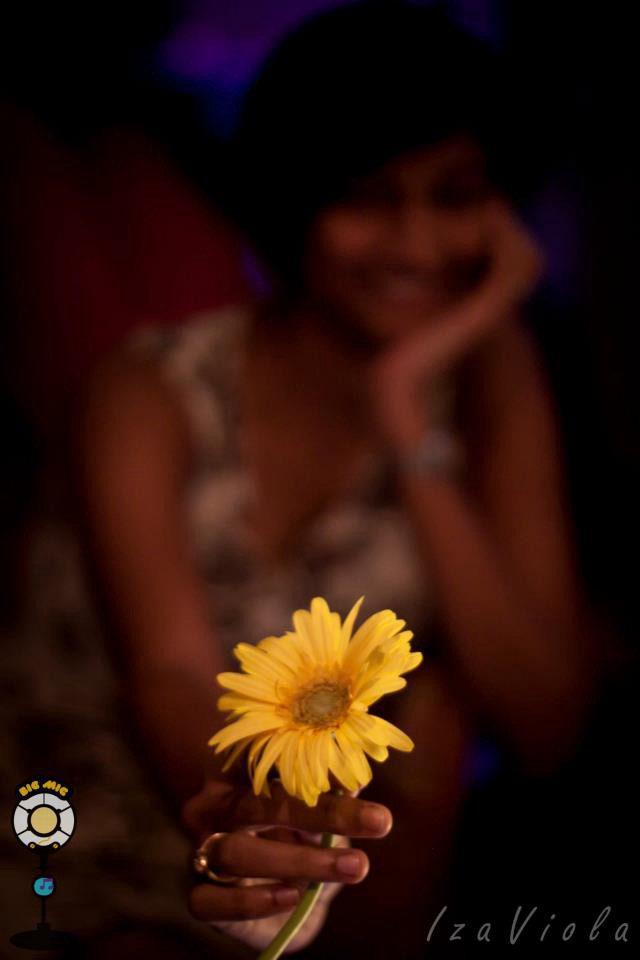 This picture was shot by a sweet young photographer at an Open Mic event in 2012 when she spotted the flower in my hand.

I was neck deep in a bad life. I had dramatically quit the respectable corporate-endorsed life two years earlier. I had wandered into something called Open Mics that had just started and very quickly I fell into a relationship with somebody I met there. Before I knew it, I was stuck inside a cage, tiptoeing around the ego and explosive emotions of someone who did not really like me, hated anyone and anything that seemed like competition. I stopped performing (or reading since that’s what we used to do then) because it was just easier than dealing with the punishment. I also stopped going out and meeting friends, stopped talking to people. This was partly because he didn’t like it but also because no one in the world was interested in knowing that a human being still existed under the label of ‘girlfriend’. I had also committed the crime of dating someone younger than me and living with him before marriage so I was made to feel like I should be grateful I was not getting whipped in the street.

My only outings beyond shopping for vegetables and domestic chores were the fortnightly Open Mics where I was grudgingly tolerated so long as I played the adoring/subservient audience. On one such Monday, I waited all day for evening to come. It had been a very difficult few days, struggling to cope with his family’s ‘Hum to ladkewale hain’ misbehaviour, his gaslighting abuse and my own financial worries (I couldn’t work but all expenses were still split in half). We left in total silence and walked to the road. As he hailed a cab, I said, “Wait” — the first thing that had been said all evening. I turned and bought this flower from a seller on the road. He raised his eyebrows, smirked and then fell silent, probably deciding to save his barbs for his rap set coming up later.

I know it’s a weird thing to carry a flower in your hand just because. Most people assume that a woman with a flower has been gifted that by a man (everyone at the venue cooed over how romantic he must be, noting the engagement ring on my finger as well — also visible in the picture). And of course, it’s an odd accessory to bring into a bar. But that night, this flower held my hand and my hope like no lover, boyfriend or friend ever has.

So when Iza Viola smiled at me and lifted her camera, I held out the flower to her. Always make room for the flowers.

One thought on “Always Make Room For The Flowers”